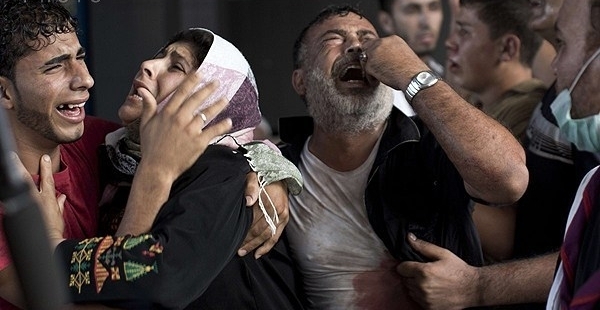 TEHRAN (FNA)- Hundreds of Iranian university students and professors in a statement called for the approval of more laws in all Muslim states and other world countries to impose a strict ban on Israeli goods and operation of companies and institutions with direct or indirect links or affiliation with Israel.

“Reminding the responsibility of the international community with regard to the crimes committed by the Zionist regime and the necessity for supporting the Palestinian people and the victims of these crimes in Gaza, we strongly voice concern about the exacerbated humanitarian crisis in Gaza which has deep wounds on human conscience,” the statement issued by professors and PhD students of the University of Tehran’s Law and Political Sciences college said on Saturday.

“We condemn the numerous cases of flagrant violation of the principles of the international law by the Zionist regime and its attack on the Gaza Strip,” it added.

They also called for boycotting Israeli goods, reminding that their interests and benefits of Israeli products are used for supporting the Zionist regime’s illegal moves, including the genocide of the Palestinians.

Earlier this month, Tehran University Professors, staff and students blasted the UN secretary-general for his inaction vis-a-vis Israel’s ongoing atrocities and massacre of the Palestinians in Gaza, and urged Ban Ki-moon to comply with his duty as the head of the world body to stop Tel Aviv’s ongoing bloodshed in the besieged enclave.

“It has now been nearly four weeks that the small blockaded and helpless land of Gaza is being destroyed through the vicious and inhumane forces of an occupying regime,” the academics, personnel and students of Tehran University said in a statement issued on August 2.

“Mr. Ban Ki-moon, due to your important responsibility, you are held accountable to end these events. Do you not see the obvious violation of international conventions and treaties? Do you not see this wild and barbaric attack as a clear example of genocide? Do you not believe that the long lasting blockade of a nation under such harsh conditions is an inhumane act? Do you not believe that issuing useless or inadequate Security Council statements along with your biased remarks enable the prolonging of this crime,” it asked sarcastically.

“You must bear responsibility for the position that you occupy. Nations find your actions to be unacceptable. It is essential that this genocide be stopped in any way possible and the captive Palestinian nation be returned its principal rights.

“We expect action. We demand action. What, sir, are you prepared to do,” the statement asked in conclusion.

The Palestinian death toll in Israel’s onslaught on Gaza surpassed 1,900 with over 11,000 people injured. Most of the casualties have been civilians, including a large number of women and children.

Meantime, over 520,000 of Gazans, nearly one out of three, have been displaced as a result of the recent aggressions made by Israeli forces against the besieged enclave.