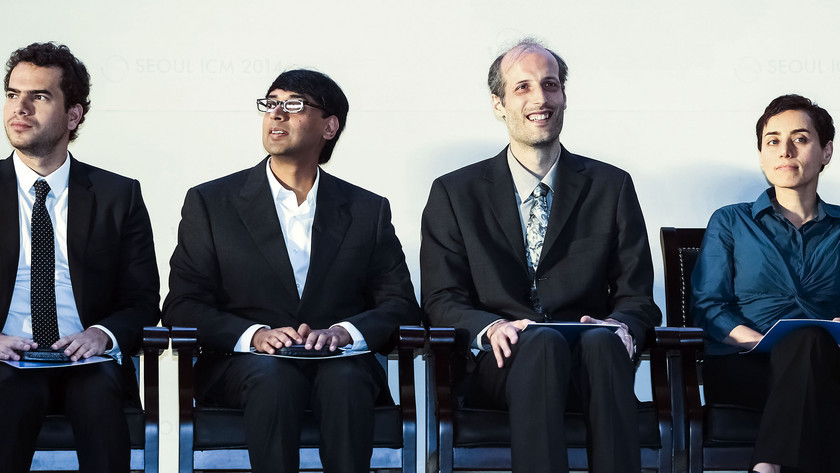 Stanford professor swaps novels for numbers on way to award

Left to right, Artur Avila, Manjul Bhargava, Martin Hairer, and Maryam Mirzakhani are awarded with the 2014 Fields Medal at the International Congress of Mathematicians in Seoul on Aug. 13, 2014. Mirzakhani is the first female winner since the prizes known as the “Nobel Prize of mathematics” were established in 1936.

Before becoming the first woman to win the top prize in mathematics, Maryam Mirzakhani grew up dreaming of becoming a writer.

The recipient of the Fields Medal, referred to as the “Nobel Prize of mathematics,” was absorbed by novels as a child in Tehran during and after the Iran-Iraq war. Her older brother got her interested in science and math, sharing what he learned in school. She was hooked after he showed her how to add up all the whole numbers from 1 to 100 in seconds, she said in aninterview she gave to the Clay Mathematics Institute.

While it wasn’t easy growing up in Iran, Mirzakhani, a mathematics professor at Stanford University, said she grew up in a “great environment” for learning, with parents who valued “meaningful” occupations over success. Her school principal fought for Iran’s International Mathematical Olympiad team to field a girl. She became friends with fellow mathematician Roya Beheshti in the first week of middle school, and met more people in the same field at Sharif University of Technology in Tehran.

“Her breadth of experience in Iran and the United States give her a kind of intellectual grace, and she even stands out in a group of brilliant people,” Curtis McMullen, Mirzakhani’s adviser on her graduate work at Harvard University, said in a phone interview. “A big role in shaping the future of other women mathematicians is having role models like Maryam.”

The Fields Medal was presented to Mirzakhani, 37, yesterday at the International Congress of Mathematicians in Seoul, Stanford said in a statement. Her work in the fields of geometry and dynamical systems was cited.

“She’s fully deserving — she’s done marvelous work,” Peter Sarnak, math professor at Princeton University and at the Institute for Advanced Study, said by phone. “She’s special in that she has changed the field in which she has worked by resolving longstanding problems — problems that had been unsolved for 20 to 30 years.”

Her research is in pure mathematics, Stanford said in the statement. While she deals with abstract concepts that may not have an immediately obvious use, her work may have an impact on topics such as theoretical physics on how the universe came to exist, material science, the study of prime numbers and cryptography.

“I will be happy if it encourages young female scientists and mathematicians,” Mirzakhani, who lives with her husband and 3-year-old daughter in Stanford, near Palo Alto, California, said in the statement. “I am sure there will be many more women winning this kind of award in coming years.”

Mirzakhani appears to still love books, saying her work can be similar to writing a novel, Quanta Magazine reported.

“There are different characters, and you are getting to know them better,” she said to describe mathematical research, according to Quanta. “Things evolve, and then you look back at a character, and it’s completely different from your first impression.”

Mathematics has long been dominated by men, with women comprising 28 percent of the doctorates in mathematics and statistics in 2011-2012, only 5 percentage points up from two decades earlier, according to data from the National Center for Education Statistics. Mirzakhani was among four recipients this year of the Fields Medal, officially known as the International Medal for Outstanding Discoveries in Mathematics.

“One of the important things about having women faculty, women role models to students, is there aren’t as many women students going into mathematics as we would like,” said Rafe Mazzeo, who was Stanford’s mathematics department chair when Mirzakhani was recruited.

“She seems to have a very novel way of understanding things and a very tenacious hold on things,” Mazzeo said in a phone interview. “She’s working in an extremely fertile part of mathematics that has connections to other areas, like physics.”

Mirzakhani said her older brother introduced her to the elegance that can be found in mathematical solutions when he shared how Carl Friedrich Gauss solved the problem of adding all the whole numbers from 1 to 100.

“The solution was quite fascinating for me,” she said. “That was the first time I enjoyed a beautiful solution.”

The ending of the war with Iraq — in which a combined 1 million people died — as she finished elementary school was fortuitous.

“I couldn’t have had the great opportunities that I had if I had been born ten years earlier,” she said in the interview by the Clay Mathematics Institute, a foundation focused on increasing mathematical knowledge that gave her a research award in July.

The principal at the Farzanegan school she went to was “a strong-willed woman” who fought for the girls’ school to have the same opportunities as boys did, she said.

“I think I was the lucky generation,” she told Quanta. “I was a teenager when things got more stable.”

As a teenager, she won gold medals at the 1994 and 1995 International Math Olympiads, Stanford said. Beheshti, now a mathematics professor at Washington University, also competed at the 1994 event, Quanta reported.

“It is fun,” Mirzakhani said in the statement, describing her field. “It’s like solving a puzzle or connecting the dots in a detective case.”

Mirzakhani, who has been at Stanford since 2008, received her doctorate in 2004 from Harvard, based in Cambridge, Massachusetts. McMullen, her adviser, received the Fields Medal in 1998. She was an assistant professor at Princeton University in New Jersey from 2004 to 2008 as well as a research fellow at the Clay Mathematics Institute in Providence, Rhode Island.

In 1998, she was part of an elite group of Sharif University of Technology students that competed in a math competition in the city of Ahvaz, in southern Iran. On the return journey, the bus fell off a cliff, killing nine people, including seven students, according to Shargh newspaper. Mirzakhani was injured.

The next year, she got her B.S. in mathematics from the university, which is based in Tehran.

The International Mathematical Union awards the medal, along with C$15,000 ($13,800), every four years and winners must be under the age of 40. Mirzakhani is the first Stanford honoree since 1966, when a medal was awarded to Paul Cohen.

The three other recipients this year were Princeton University’s Manjul Bhargava, Artur Avila of the National Institute of Pure and Applied Mathematics in Brazil and the National Center for Scientific Research in France, and Martin Hairer of England’s University of Warwick.

South Korea’s first woman president, Park Geun Hye, presented the awards at the ceremony, which Mirzakhani attended with her husband and daughter.