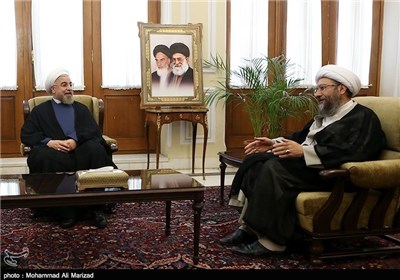 TEHRAN (Tasnim) – Iranian President Hassan Rouhani voiced his cabinet’s full preparedness to work in cooperation with the country’s Judiciary to attain the objectives of the Islamic Republic.

President Rouhani on Thursday sent Ayatollah Sadeq Amoli Larijani a congratulatory message on his reappointment as the country’s judiciary chief for another term.

In the message, the president underlined that his administration would thoroughly cooperate and interact with the judiciary in a bid to achieve the aspirations set by the late founder of the Islamic Republic, Imam Khomeini, the guidelines given by Supreme Leader of the Islamic Revolution Ayatollah Seyed Ali Khamenei and the tenets of the Constitution.

On Thursday, Ayatollah Khamenei reappointed Ayatollah Larijani for another 5-year term as the country’s judiciary chief, based on the article 157 of the Constitution.

In his statement, Ayatollah Khamenei emphasized that establishing suitable mechanisms to ensure easy access justice, fighting corruption, and providing social security could bring prosperity for the judicial system and help realization of the Islamic justice.

He is the fifth judiciary Chief appointed since the victory of the 1979 Islamic Revolution in Iran.