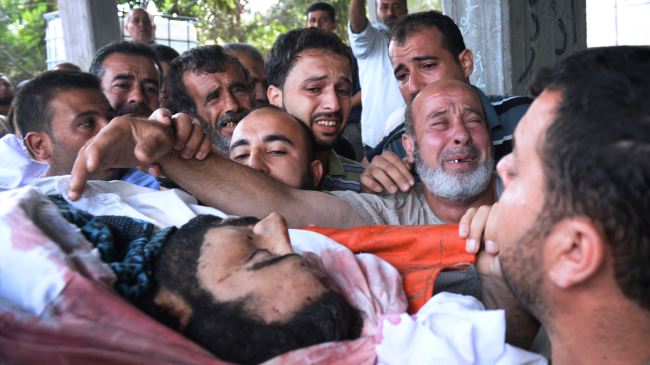 Two more Palestinians have died after succumbing to their injuries sustained in Israeli strikes on the besieged Gaza Strip.

The latest fatalities on Thursday raised the death toll from Israel’s relentless attacks on Gaza to 1,962.

Israel launched the latest war against the coastal enclave on July 8. At least 10,100 others have so far been injured in the offensive.

Meanwhile, Israel and Palestinians on Wednesday agreed to extend a temporary truce in Gaza for five more days as Israeli and Palestinian negotiators continued talks to reach a long-term deal in the Egyptian capital Cairo.

However, the Israeli regime carried out four airstrikes against Gaza shortly after the extension of the ceasefire.

Israel claimed that its airstrikes on Gaza were in response to a number of rockets fired by the Palestinian resistance movement Hamas. However, the resistance group rejected the Israeli claim.

Hamas spokesman Fawzi Barhoum said Israel had committed a “gross breach” of the ceasefire, warning Tel Aviv that it would suffer consequences.

Hamas Leader Ismail Haniyeh has also said a permanent truce with the Israeli regime cannot be achieved other than by the complete removal of a seven-year-old blockade on Gaza.

Gaza has been blockaded by Israel since June 2007, a situation that has caused a decline in the standards of living, unprecedented levels of unemployment, and unrelenting poverty.

The United Nations Children’s Fund (UNICEF) says nearly 400,000 Palestinian children are in immediate need of psychological help due to “catastrophic and tragic impact” of the Israeli war.