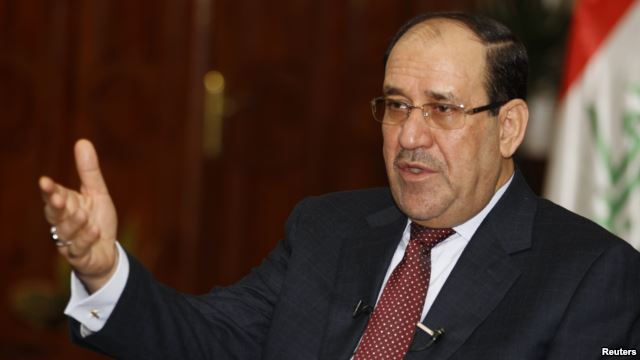 Pressure mounts on Iraq’s Maliki to step down

Pressure is building on Iraq Prime Minister Nuri al-Maliki to leave office hours after he said he would only exit his post if forced by a court decision.

Maliki’s Dawa Party also said in a statement on August 13 that all political blocs should “cooperate with the constitutionally designated prime minister” Abadi to allow for the quick formation of a new government.

The UN Security Council said in a statement it is encouraged by Abadi’s nomination and urged him to “work swiftly to form such a government as quickly as possible and within the constitutional time-frame.”

It also urged “all political parties and their supporters to remain calm and respect the political process.”

Iraqi President Fuad Masum on August 11 asked Abadi, a senior Shi’ite politician, to form a new government within 30 days, as outlined in the constitution.

But Maliki said on August 13 that Abadi’s appointment was a “violation” of the constitution and “had no value.”

Iraq’s leading Shi’ite cleric, Grand Ayatollah Ali al-Sistani, addressed a letter to the leadership of Maliki’s Dawa party saying, “I see the need to speed up the selection of a new prime minister.”

The contents of the handwritten letter were released on August 13 by Sistani’s office, although the letter was written more than one month ago.

The U.S. deputy national security adviser for strategic communications, Ben Rhodes, on August 13 called on Maliki to step down, saying Maliki needs to allow Abadi to form a government.

Rhodes said “That is what the Iraqis themselves have decided to do.”

But Maliki said earlier on August 13 in his televised weekly address, “I confirm that the government will continue and there will not be a replacement for it without a decision from the Federal [Supreme] Court.”

Maliki, the premier since 2006, has served in a caretaker capacity since elections in April.

He has been accused of fueling sectarian violence as the country is battling an Islamist insurgency, but he has refused calls by Sunni, Kurdish, and fellow Shi’ite politicians to step down.

Khamenei said, “I hope the designation of the new prime minister in Iraq will untie the knot and lead to the establishment of a new government and teach a good lesson to those who aim for sedition in Iraq.”