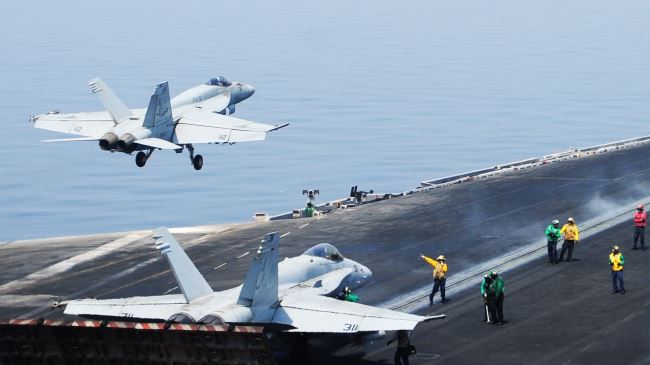 US raids in Iraq show of double standards: Iran speaker

The Iranian Majlis speaker says the sudden decision by the US to militarily intervene in Iraq after its inaction regarding the massacres in the Arab country and its Western neighbor, Syria, shows Washington’s duplicitous and double standard policies.

“[US President Barack] Obama has become concerned about the Kurds while many Christians, Sunni Muslims, Druze and Alawites were killed in Syria, but they (US officials) remained silent,” Ali Larijani said at a gathering in Tehran of Iranian ambassadors and envoys on Tuesday.

The Iranian official said the US also refused to take any action in Iraq despite the killing of a great number of Sunnis, Kurds, and Izadis since the breakout of the crisis in the Arab country.

“Now, all of a sudden they have become conscious. This shows that they (US officials) have adopted a double standard and tactical approach toward this issue and this is wrong.”

Violence escalated in Iraq when ISIL Takfiri militants took control of Mosul on June 10 northwest of the capital, Baghdad.

Obama authorized on Thursday the use of airstrikes to prevent the advance of ISIL terrorists in Iraq in northern Kurdish areas and to protect American personnel and interests inside the country.

Larijani further expressed hope that political stability would return to Iraq following the appointment of Haider al-Abadi as the country’s new prime minister.

In a televised address, Massoum gave Abadi 30 days to form the next government and present it to parliament for approval.