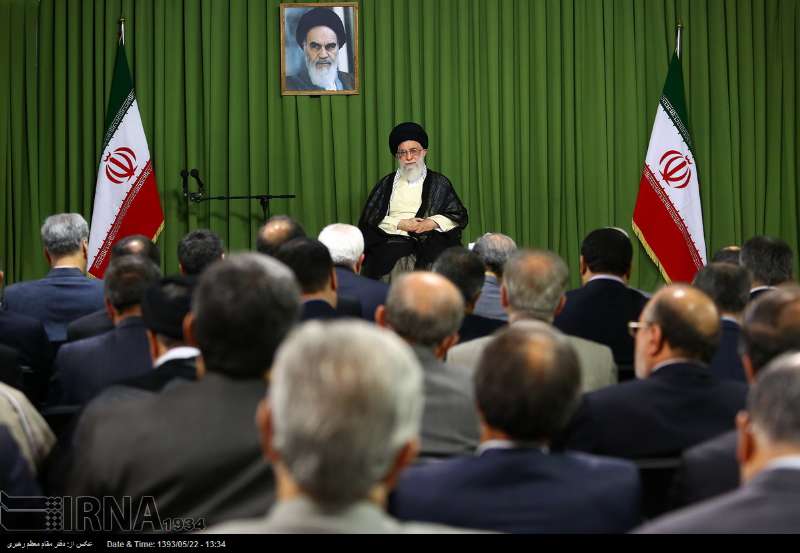 US even more hostile despite negotiations: Leader

On Wednesday, Leader of the Islamic Republic received officials of Foreign Ministry, Iranian ambassadors and diplomats abroad, who are in Tehran for annual meeting of Iran’s ambassadors and heads of consulates.

The gathering opened on Monday with President Rouhani’s address. Secretary of Iran’s Supreme National Security Council Ali Shamkhani was the second speaker who talked about the recent developments in the region.

On Wednesday meeting, Foreign Minister Mohammad Javad Zarif reported on Monday’s meeting and expressed gratitude for the Leader’s support for the foreign ministry.

He added that foreign ministry was resolved to implement the Leader’s guidelines in foreign policy.

Ayatollah Khamenei also addressed the meeting. “What Dr Zarif and Iran’s negotiators have achieved would be continued; their negotiating experience is a priceless achievement for all to know that negotiations with the US will not lessen their animosity toward Iran,” asserted the Leader.

Ayatollah Khamenei used a metaphor to compare diplomatic field to war fronts and believed that the current era was a time of transition toward a new world order, emphasizing that in this era, strong and pragmatic diplomacy was of great importance which made the foreign ministry’s duty even more difficult.

Leader of the Islamic Republic pointed to the other nations’ hatred for the US blind support for Israel in Gaza and reiterated that no one in the world would exculpate the US from complicity in the genocide by the usurper, cruel and pagan Zionist regime in Gaza; “the US is now in a weaker stand,” added the Leader.

“Palestinian’s polemic about truce is correct. They say predatory regime of Israel cannot do any crimes it wills and return to pre-war days unscathed,” said the Leader.

“There should be a reparation for Zionists’ crimes in Gaza and in the Palestinians’ view, the reparation would be an end to Gaza siege,” said the Leader, closing his remarks with “no just person would ever deny such rightful demand.”