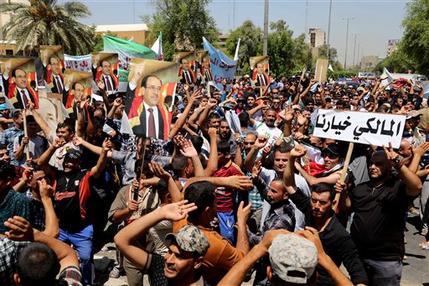 Pro-government supporters of Prime Minister Nouri al-Maliki, chant slogans during a demonstration in Baghdad, Iraq, Wednesday, Aug 13, 2014. Tanks and Humvees were positioned on Baghdad bridges and at major intersections on Wednesday, with security personnel more visible than usual as pro-Maliki demonstrators took to Firdous Square in the capital, pledging their allegiance to him. Arabic on the placard at right reads, “al-Maliki is our choice.” (AP Photo/Karim Kadim)

BAGHDAD (AP) — Iraq’s Prime Minister Nouri al-Maliki said Wednesday he will not relinquish power until a federal court rules on what he called a “constitutional violation” by the president to replace him with a member of his own party.

The embattled premier has grown increasingly isolated, with Iraqi politicians and much of the international community lining up behind Haider al-Abadi, a fellow member of his Shiite Dawa party tasked by the president with forming a new government that can unite the country in the face of an onslaught by Sunni militants.

“Holding on (to the premiership) is an ethical and patriotic duty to defend the rights of voters,” he said in his weekly televised address to the nation. “The insistence on this until the end is to protect the state.”

Al-Maliki on Monday vowed legal action against President Fouad Massoum for carrying out “a coup” against the constitution.

“Why do we insist that this government continue and stay as is until a decision by the federal court is issued?” he asked, answering: “It is a constitutional violation – a conspiracy planned from the inside or from out.”

Tanks and Humvees were positioned on Baghdad bridges and at major intersections on Wednesday, with security personnel more visible than usual. About 100 pro-Maliki demonstrators took to Firdous Square in the capital, pledging their allegiance to him.

But al-Maliki, whose bloc won the most votes in April elections, has thus far refused to step aside and rejected the appointment of al-Abadi as unconstitutional. Al-Abadi was selected by the main Shiite alliance which includes al-Maliki’s bloc, but the Islamic Dawa party says al-Abadi “only represents himself.”

Tanks and Humvees first rolled across the city early Monday after al-Maliki delivered a surprise midnight address first declaring his plans to take his complaint to federal court.

At a meeting between al-Maliki and senior military commanders broadcast on state television Tuesday, al-Maliki said security forces should not get involved in politics, but raised the specter of further unrest by saying that Sunni militants or Shiite militiamen might don military uniforms and try to take control of the streets.

“This is not allowed because those people, wearing army uniforms and in military vehicles, might take advantage of the situation and move around and make things worse,” he said.

The turmoil stems from the rapid advance of the Islamic State group and allied Sunni militants across northern and western Iraq in June. Fueled by widespread Sunni discontent with al-Maliki’s rule, the insurgency seized Iraq’s second largest city Mosul and routed the beleaguered armed forces. Thousands of people have been killed and more than 1.5 million displaced by the violence.

The militant advance slowed as they approached Baghdad and other majority Shiite areas, but the capital still sees near daily attacks.

A car bomb struck a police a checkpoint in western Baghdad on Wednesday, killing six people, including four policemen, and wounding 16, police and hospital officials said. A separate car bomb killed four people and wounded 11 others in the Baiyaa neighborhood, and a mortar attack north of the capital killed four and wounded seven, the officials said. They spoke on condition of anonymity because they were not authorized to speak to reporters.

In northern Iraq, thousands of members of the Yazidi religious minority remain stranded in the mountains outside the town of Sinjar, which the Islamic State group captured earlier this month. The Islamic extremists view the Yazidis as apostates and have vowed to kill all those who do not convert.

The Yazidis’ plight has prompted a multinational relief effort, with Iraqi and U.S. planes dropping dozens of crates of food and water. An Iraqi helicopter providing aid crashed near the mountain on Tuesday, killing the pilot, army spokesman Qassim al-Moussawi said in a statement. A New York Times reporter and a freelance photographer survived the crash.

The U.S. military has meanwhile targeted the Islamic State group with a series of airstrikes aimed at protecting the Yazidis and slowing the advance of the militants toward Irbil, the capital of the largely autonomous Kurdish region. On Tuesday, a U.S. drone destroyed a militant mortar position threatening Kurdish forces defending refugees near the Syrian border.

Another 130 U.S. troops arrived in Irbil on Tuesday on what the Pentagon described as a temporary mission to assess the scope of the humanitarian crisis on Sinjar Mountain.

Australia’s Prime Minister Tony Abbott meanwhile held open the possibility of sending a combat forces to Iraq in addition to military transport aircraft. But Defense Minister David Johnston on Wednesday played down the prospect of an Australian combat force, saying the military had only committed to sending two C-130 Hercules transport planes for humanitarian aid drops to begin within two or three days.

France will send arms to Kurdish forces in the country, it said Wednesday, in order to support their fight against Islamic State militants. It also added pressure on other European leaders to contribute to the effort earlier this week, when it called for an urgent meeting of EU foreign ministers to consider Kurdish requests for arms and an aid airlift to northern Iraq.