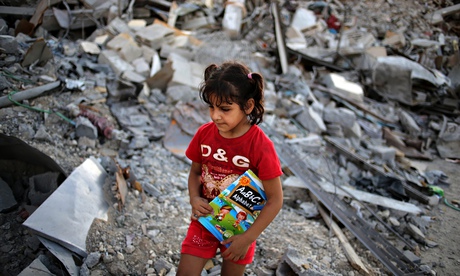 Gaza: hopes rise of end to war as Hamas ‘optimistic’ of deal with Israel

Iman al-Masri, 5, stands in the rubble of her family’s home in the Gaza Strip on Tuesday, the second day of a 72-hour ceasefire. Photograph: Mohammed Saber/EPA

Hopes rose on Tuesday night of an end to the month-long war in Gaza, with officials from Hamas and other groups expressing cautious optimism that a deal would be made with Israel before the current 72-hour ceasefire ends on Wednesday evening.

After a day of conflicting reports about Egyptian mediators’ efforts to narrow the gap between the two sides, Ihab al-Ghossein, a senior Hamas official and spokesman in Gaza, said he was optimistic.

“This time at least it is a real negotiation. There is talking and discussion about all our points and hopefully we will have an agreement. I’m optimistic there will be something,” he said.