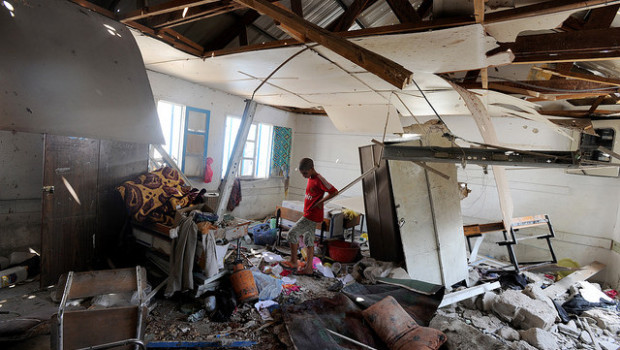 A Palestinian student inspects the damage at a UN school at the Jabalia refugee camp in the northern Gaza Strip after the area was hit by Israeli shelling on July 30, 2014. Credit: UN Photo/Shareef Sarhan

With US bombs dropping on Iraq once again and Israeli troops having moved out of Gaza, the fighting between Hamas and Israel has faded a bit from the headlines. But the battle for the narrative of the 2014 Gaza war is now stepping up its intensity, and, as usual, the truth seems to be losing.

To comprehend what has happened in Gaza and Israel over the past few months, one must understand not only the underlying causes, but also the immediate triggers. It is something of a victory that one of those underlying causes, the siege of the Gaza Strip, has remained at the center of the discourse, after spending much of the past seven years off the radar and outside of diplomatic and media discussions.

One overarching point, however, has become a virtual theme not only in Israel, but also in the United States and much of Europe: this latest conflagration started as a result of Hamas rockets being fired upon Israel. Yet only a willful misreading of the timeline can bring about this conclusion.

Two events set the current escalation in violence in motion. One was precipitative: the unity government agreement between Fatah and Hamas. That move was welcomed, however conditionally, by the US and the international community, but was bitterly opposed by Israel’s far-right government.

Prime Minister Benjamin Netanyahu was concerned that a unified Palestinian government would be in a better position to restart the peace process to which he is so opposed, and possibly even wrangle international pressure toward some small concessions from Israel. He needed an opportunity to shatter that unity government without incurring the wrath such open defiance could bring, especially from Europe.

The second event was the spark that gave Netanyahu just what he wanted. The kidnapping and murder of three youths from an Israeli settlement presented him with a political opportunity and he seized it.

By the morning after the event, the Israeli government knew the youths were dead. Israelis are somewhat accustomed to people being killed, but when they are held captive, the country becomes incensed. So, Netanyahu maintained a charade about the young men being alive to whip the country into a frenzy.

As the anger in Israel built up, Netanyahu stoked the Palestinian fire with a massive operation in the West Bank, targeting Hamas operatives. The Israelis did this knowing that the kidnapping was not a Hamas operation, but one perpetrated by the Qawasmeh clan, which is affiliated with Hamas but is notorious for acting on its own. Recently, Israel has tried to cover up this aspect with claims about the perpetrators having received “funding” from Hamas. But that is a thin tale; this act didn’t require any funding.

So Israeli forces swept through the West Bank, sometimes encountering resistance that resulted in several Palestinian deaths, and brought the day-to-day lives of tens of thousands of Palestinians to a halt. They arrested hundreds without charge, including many who had been released in 2011 as part of the swap for the captured Israeli soldier, Gilad Shalit. That was a breach of the exchange agreement and a very sore point for Palestinians across the board.

It was at this point that one of the quietest periods in rocket fire from Gaza began to crack, although Hamas was not yet the party firing. Matters escalated from there, with all the horrors, bloodshed and destruction that we’ve since witnessed.

That picture obviously doesn’t paint Israel in a very favorable light. So it’s no surprise that it is being distorted by the constant repetition, from a great many quarters, that “no country would tolerate rockets being fired at it or tunnels being dug across its border.”

We’ve been hearing that line or support for it even from people critical of Israel’s swath of destruction across Gaza. It is often a justification for Israel’s actions, within a criticism of Israel is “going too far,” perhaps even way too far. But this war was a lot more than a justifiable response taken too far.

Israel’s “right of self-defense” was defended like a holy relic. But little is ever mentioned about the requirement under international law for an occupying power to ensure the safety of the people under its occupation. In other words, Israel is ultimately responsible for the safety of Palestinians not only in the West Bank, but also in Gaza. Israel controls Gaza’s coastline, airspace and most of its borders as well as holding a “buffer zone” inside it. So even under the kindest interpretation, Israel is at least responsible for protecting Gaza from outside attack.

Israel is also undoubtedly absolutely responsible for the safety of its citizens. It certainly does have every right to protect Israeli civilians from attacks, whether from within or without. That, however, is not the same as the right of self-defense.

The tunnels, which have become a terrifying specter for Israelis despite the fact that they’ve been there for years in some cases and had not been used until this conflict was in full swing, did not necessitate the massive destruction that Israel caused in Gaza. Egypt managed to find a way to destroy hundreds of tunnels without levelling Rafah, for example.

It is, of course, true that countries do not tolerate cross-border fire and infiltration. But in most cases, countries avoid the whole question by not occupying territory over their border. True, Israel is not the only country engaging in occupation, but the examples are few and far between these days — relics of a bygone age when colonialism was in style. That’s why Israel is dealing with these vexing issues. Indeed, while sovereign states have the right of self-defense and the responsibility to protect their citizens, occupied people also have the right to resist — but we don’t hear that very often.

Of course, the right to resist does not mean Hamas or any other Palestinian group is justified in targeting civilians or putting civilians at undue risk with indiscriminate weapons. Any legitimate inquiry into the events of recent weeks must look at those crimes as well.

Still, the narrative needs to be kept in perspective. First, any balanced judgment of what has happened needs to recognize the capacity of each side not only for destruction, but also for avoiding undue destruction. It must also examine the scope and scale of damage suffered by each side.

A reasonable narrative must also consider the entire situation. The escalation to this conflict was caused by Israel’s attempt to shatter the Palestinian unity government. The war probably went further than Netanyahu — who is not adventurous by nature and tends to be more reluctant about engaging in large-scale military actions than most of his predecessors — really wanted. But this war did not start because Hamas increased its rocket fire. Nor did it begin with the goal of eradicating infiltration tunnels.

If people believe Israel was justified in its actions, then they should be defending the actions Israel actually took. Instead, the narrative is being shaped by an opening sentence: no country would tolerate rockets and tunnels. One hopes reality will seep in, but when even many critical thinkers begin their argument that way, it’s hard to stay hopeful.

This article was written by  Mitchell Plitnick for Lobe Log on AUG. 13, 2014. Mitchell Plitnick is the former Director of the US Office of B’Tselem: The Israeli Information Center for Human Rights in the Occupied Territories, and was previously the Director of Education and Policy for Jewish Voice for Peace.