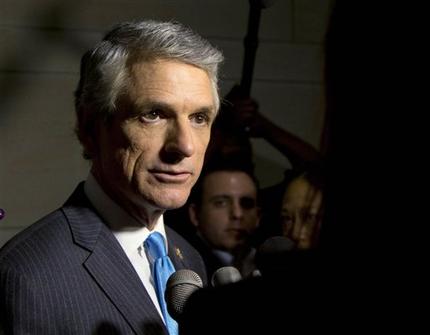 Congress on board with Obama’s Iraq plans

Almost a week into the Obama administration’s emergency action in northern Iraq, the campaign is attracting surprisingly broad bipartisan support. Republicans have issued several I-told-you-so statements and called for stronger action, and dovish Democrats say they’re concerned about slipping into a new war. But outright opposition has been muted.

“The need to move quickly to prevent further loss of life of men, women and children is not in dispute,” said Rep. Scott Rigell, R-Va., expressing the view on Iraq of many in both parties. A year earlier, Rigell wrote a letter to President Barack Obama demanding that the White House seek congressional approval before ordering an attack on Syria, collecting the signature of more than 100 of his fellow House members.

Lawmakers returned early from a recess full of town hall meetings where they heard little support for action. Facing defeat in the House and Senate, the administration ultimately opted for Russian-supported mediation and Assad relinquishing his chemical arsenal.

Several elements worked against Obama back then. Americans felt little responsibility for Syria, a country the United States has shunned for decades. Even without committing ground troops, U.S. airstrikes would have meant taking on a Syrian military with formidable air defense capabilities. The effort also could have helped anti-Assad groups with questionable motives, including the Sunni militants who’ve since named themselves the Islamic State and invaded Iraq, prompting that country’s civil war.

Iraq’s crisis is in some ways more urgent, though still far less deadly than the three-year fight in neighboring Syria, which has killed 170,000 people.

Obama says he’s acting to protect thousands of American personnel in Iraq and avert a possible genocide of minority groups. In a place where the U.S. spent hundreds of billions of dollars and lost almost 4,500 lives trying to secure, the fact that hundreds of thousands of Christians are at risk reinforces an American sense of responsibility.

Unlike with Syria, the U.S. is working with the government in Iraq and fighting a group already on a U.S. terrorism blacklist. It is providing military assistance to the central government in Baghdad and to the largely autonomous Kurdish authorities in the north, a bastion of pro-American sentiment in a region full of Sunni extremist and Iranian influence.

Perhaps more confident of backing at home, Obama sidestepped asking for Congress’ permission this time. So far, he appears justified.

“The president’s authorization of airstrikes is appropriate,” House Speaker John Boehner, R-Ohio, said last week. Boehner, however, also accused Obama of lacking a comprehensive strategy, which he said “only emboldens the enemy and squanders the sacrifices Americans have made.”

Many Republicans issued similar support for the action accompanied by broader criticism of Obama’s Iraq policy. They cite the administration’s inability to secure a U.S. military presence in Iraq after 2012 and its refusal for several weeks to order military action while officials were collecting intelligence and prodding Iraq into forming a more inclusive government. Iraq’s new president on Monday nominated a senior Shiite lawmaker to form a new Cabinet, snubbing powerful incumbent Prime Minister Nouri al-Maliki.

But some in Obama’s own party expressed reservations.

Sen. Dick Durbin of Illinois, the No. 2 ranked Democrat, who voted against President George W. Bush’s Iraq war authorization 12 years ago, said the White House assured him no U.S. boots on the ground were required. “While this is strictly an air mission, I still have concerns,” he declared, saying American troops couldn’t solve Iraq’s underlying problems.

Sen. Martin Heinrich, D-N.M., said he shared his constituents’ “weariness about any expansion of U.S. involvement in Iraq” and warned about “mission creep.” Still, he said the threat from the Islamic State was “real and extends to U.S. interests both in the Middle East and at home.”

Rep. Keith Ellison, D-Minn., one of two Muslims in Congress and among its most dovish members, voiced support for limited intervention.

“Nations with the power to act have a responsibility to protect those who cannot protect themselves,” Ellison said.