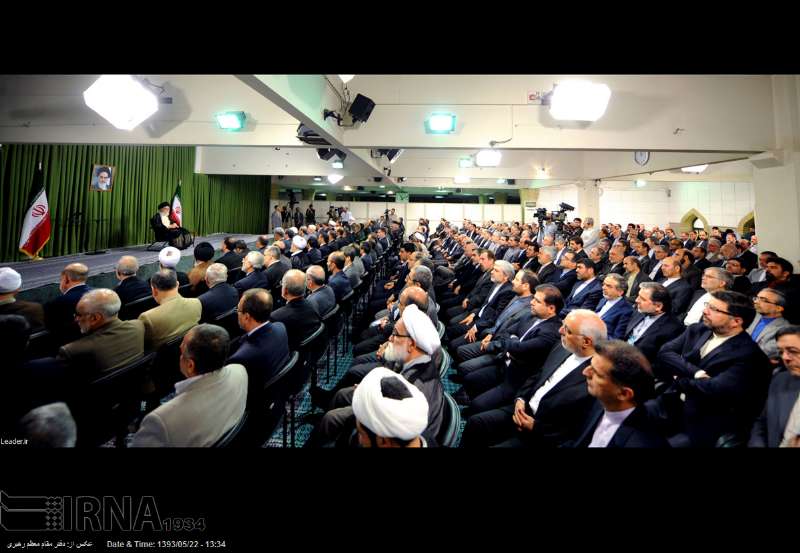 TEHRAN (FNA)- Supreme Leader of the Islamic Revolution Ayatollah Seyed Ali Khamenei blasted the US for its collaboration with the Zionist regime in committing savage crimes against the Palestinians, and said Israel should pay the price for its recent atrocities in Gaza.

“The Palestinians are pursuing a correct rationale with regard to ceasefire as they state that accepting ceasefire means that the blood-thirsty and predator Zionist regime can create any catastrophe it wants and the next day everything will become like before and the situation will return to the day before the attack, meaning extreme siege and continued pressures, without any reparation,” Ayatollah Khamenei said, addressing a meeting here in Tehran on Wednesday with Iran’s diplomatic corps abroad who have convened in the Iranian capital since Sunday to discuss agenda for their mission in the next year.

“As the Palestinians say there should be retribution for all these crimes which is the end of the Gaza siege, and no fair human being can reject this righteous demand,” he added.

Ayatollah Khamenei lashed out at the US for its collaboration with the Zionist regime in its cruelties against the Palestinians, and said nations now hate the Americans more than ever and the US and Israel are in a growingly weak position now.

In relevant remarks in July, Iranian Deputy Foreign Minister Morteza Sarmadi underscored that the removal of the Gaza siege should be included in any ceasefire plan between Israel and the Palestinians.

Sarmadi made the remarks in a meeting with the outgoing Italy’s Ambassador to Tehran Luca Giansanti.

He touched upon the humanitarian crisis in Gaza, and said lifting the Israeli blockade on Gaza should be part of any ceasefire plan.

He expressed deep concern over the situation in the besieged Gaza Strip, and criticized silence of the international organizations on what’s happening in the impoverished Palestinian district.

Also last month, Iranian President Hassan Rouhani in a phone talk with Turkish Prime Minister Recep Tayyip Erdogan called for cooperation and immediate efforts by Islamic countries to render effective help and assistance to the people in Gaza, stop the Zionist regime’s attacks and remove the siege of the enclave.

Israel pounded the blockaded Gaza for over one month, killing nearly 2,000 people and injuring more than 11,000 others.