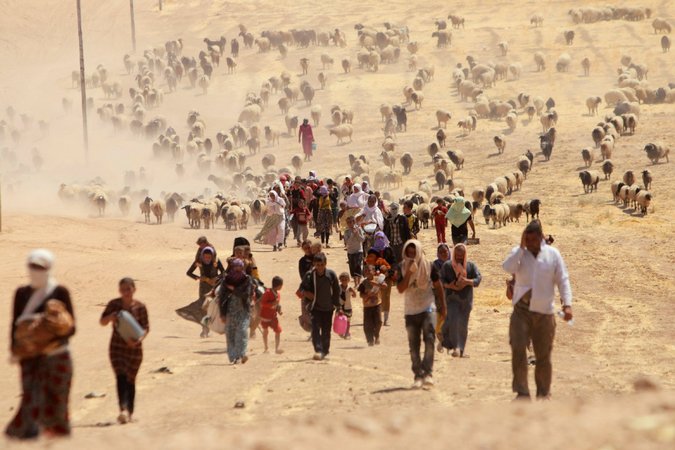 Pentagon says airstrikes have slowed but not stopped Sunni militants

Members of the Yazidi minority, driven from their homes in northern Iraq by Sunni militants, headed toward the Syrian border, on the outskirts of Mount Sinjar. Credit Rodi Said/Reuters

WASHINGTON — Four days of airstrikes have slowed the progress of Sunni militants laying siege to refugees on Mount Sinjar and advancing toward the Kurdish capital of Erbil, but the Islamic State in Iraq and Syria remains strong and on the offense, the Pentagon said Monday.

While the airstrikes on targets around Sinjar and to the west of Erbil have “slowed and temporarily disrupted” the ability of the militant group, known as ISIS, to attack Kurds in northern Iraq, Lt. Gen. William C. Mayville, the director of operations with the Joint Chiefs of Staff, said that they had not substantially weakened ISIS, and that thus far the attacks seemed unlikely to halt the group’s advances in other parts of Iraq.

“We may have blunted some tactical decisions to move farther east to Erbil, but what I expect ISIL to do is to look for other things to do,” General Mayville said, using an alternate name for the Sunni group. “In no way do I want to suggest that we have effectively contained or broken the effect of ISIL.”

Reflecting that reality, the Kurdish military on Monday celebrated its victory over the Islamic State in two towns near Erbil, but were losing ground in neighboring Diyala Province, which borders Kurdistan. “Yesterday we won in Gwer and in Makhmour, but we lost in Jalawla, and that was very important to us,” said Gen. Halgurd Hikmet, the spokesman for the Kurdish security forces, known as the pesh merga.

The Central Intelligence Agency has begun directly supplying weapons to pesh merga fighters, administration officials said, after weeks of pleas and demands from leaders in the country’s semiautonomous Kurdish region for help in fighting ISIS. But it remains unclear just how much weaponry the United States has funneled through to the Kurds so far; military officials said they would probably begin sending small-arms munitions soon, too.

“The pesh merga are composed of capable, disciplined forces who deserve their reputation as fierce mountain-war fighters,” a United States official said. “However, it’s been almost a decade since their mostly light infantry brigades have been tested in battle, so it’s not surprising that they’ve taken some knocks from ISIL.”

The Kurds have asked the United States to provide — or in some way help them obtain — sniper rifles, mortars, heavy machine guns, wire-guided antitank weapons and antitank guns, rocket-propelled grenades, Humvees and tanks, among other weapons, Kurdish officials said. They have also asked for body armor and helicopters for evacuations.

A senior military official said Monday that the Pentagon was concentrating on rifles and machine guns. He declined to say what kinds of weapons the C.I.A. had begun supplying the Kurds.

A second Pentagon official, also speaking on the condition of anonymity as a matter of policy, said that the Defense Department had yet to decide whether it would supply the pesh merga with antitank guns, but that “whatever they are getting will be in line with meeting the proper requirements for the kind of defenses that they’re conducting.”

In the past, American officials have been hesitant about directly supplying weapons to the Kurds, who differ with Iraq’s current prime minister, Nuri Kamal al-Maliki, over the division of oil resources and how much territory should fall within the Kurdistan region’s borders. In addition, the Kurds initially took advantage of the conflict with ISIS to expand their own territory in northern Iraq. Many Obama administration officials say privately that they do not expect Kurdistan to remain part of Iraq once the fighting is over.

ISIS views Iraq’s majority Shiites and other religious minorities as infidels who should be killed if they refuse to convert to Sunni Islam. They accuse the Kurds, most of whom are Sunnis, of secularism.

Across Kurdistan, security officials say they see a pattern in which ISIS attacks in one place, stabilizes it and then attacks in another. A week ago the group’s focus was on Sinjar and displacing the Yazidi religious group, as well as taking the more centrally located Mosul Dam. But in the past couple of days, it has focused on Diyala Province in the far east. These areas are all near the border with Kurdistan, where a significant Arab population has in many cases either supported or tolerated ISIS, in part because the Arab communities do not necessarily want to be absorbed into Kurdistan as it tries to take over disputed areas along its borders.

But the attack and resultant losses in Jalawla bore some resemblance to the one on Mosul that preceded that city’s fall.In Jalawla, two large car bombs exploded in the center of the townin an area where the pesh merga fighters were gathered.

The bombs killed at least five Kurdish fighters, according to pesh merga officials, but other accounts put the number of dead at 20, with many more wounded.

“After the two big explosions happened in the center where they were all together in one building, the pesh merga decided to retreat from Jalawla,” said Lahowr Shiekh Jangee, the chief of protection and information for the pesh merga in the Kurdistan region.

Mr. Jangee said the Kurdish forces planned to take back the area soon and had set a date for doing so, although he did not disclose it. The one difficulty, he said, was determining which side local Arabs were on.

Across the north, Arab fighters have often sided with ISIS, but since, in theory, they are the people the pesh merga are guarding, it has made for a fraught and unpredictable situation.

“We are waiting for the Arab clans in Jalawla to make clear who they are supporting,” Mr. Jangee said. “Because we know they were ISIS’ eyes and ears and guides and fighters in Jalawla. If they are going to be with ISIS or not, they need to declare it.”

Other pesh merga officers insisted that their retreat was tactical and was done to enable the United States to bomb the area.