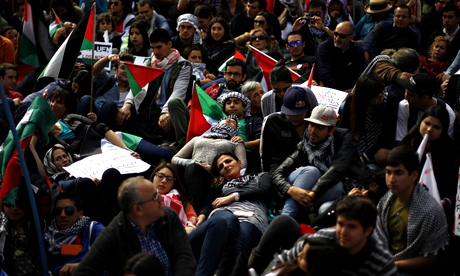 Out of the carnage of Gaza a new spirit: we are all Palestinians

A rally for peace in Gaza, in Santiago, Chile. Photograph: Ivan Alvarado/Reuters

On this bloody international battlefield over truth, where thousands of Palestinians now die, Israel has lost. It is in possession of the most powerful and entrenched lobby in America that terrorises its now abject political class – most recently frightening the senate into unanimously voting in favour of its current aggression. In Britain, the BBC and a prime minister that have shamed and revolted the citizens they serve. It has tireless advocates and apologists manning editorial desks and television producers’ offices. It is ranked among the world’s top military powers.

Yet with all of this, it has lost, and the Palestinian cause has been made that much stronger. This is because the entire world has been able to grasp, very precisely and intimately, exactly what Palestinians have been facing day in day out for decades. The temporary safety of an Unrwa girls’ school in an overcrowded refugee camp, with its pile of children’s clothes and mattresses blood-soaked from long-range missiles; dusty roads filled with the debris of collapsed residential buildings, under which entire families groan and fall silent.

We learn what will happen immediately after Israeli soldiers die, or a ceasefire is about to come into force; the harbinger of new massacres. People shelled as they flee, exhausted ambulance workers murdered as they come to assist those wounded and dying; boys killed watching the World Cup in a beachside cafe, or simply fooling with a ball in the dunes by a hotel; overflowing makeshift mortuaries, where parents hold their children’s hands and kiss their foreheads one last time. In Gaza, as in Jenin, Karameh or Beirut, wherever the Palestinian people have been on their feet from 1947 to 2014, you will find this same story.