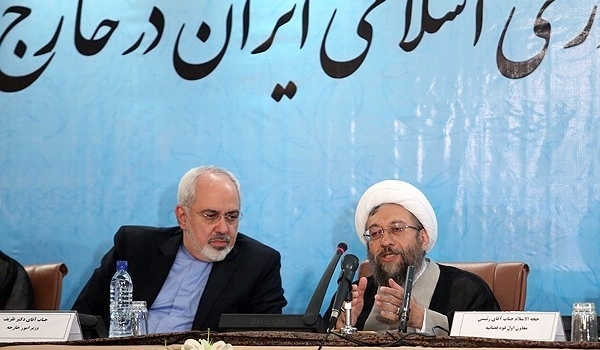 “That they say we execute homosexuals is not more than a lie,” Amoli Larijani said, addressing a convention of Iran’s diplomatic corps abroad here in Tehran on Monday.

He underlined that Iran is not against Human Rights principles, and said, “We only accept the Human Rights that is based on our religious teachings.”

Addressing the so-called Human rights advocates in the West, Iran’s judiciary chief said, “We cannot abandon the Quranic teachings for the sake of your human laws that are being implemented in European countries.”

Iran’s judiciary chief reiterated that Iran’s laws have been taken from human exigencies, and said, “Our religious identity is indebted to Quranic sciences in which we believe and we keep our heads up in the world for it.”

Amoli Larijani pointed to the issue of homosexuals, and said, “We do not provide these people with opportunity, but what they say that we hang them is a lie that they have fabricated for the Islamic Republic.”

He noted that the so-called supporters of the Human Rights defend the homosexuals, but they remain silent on the massacre of thousands of Palestinians, specially children, in the Gaza Strip and say that Israel has the right to defend.

President Rouhani’s remarks came in reaction to the western countries’ silence on Israel’s atrocities against the Palestinians in the Gaza Strip.

“It is not only human being which is killed in Gaza, but it is the humanity as a value being victimized,” the Iranian president said in his message to a gathering of Iranian children in Tehran’s Milad Tower named as ˈGaza children-Iranian children’ on Friday.

He called on the western governments to support the oppressed people of Palestine despite the interests they have in alliance with Israel.

“Bombardment of schools and killing of children in Gaza is a clear example of genocide in the world today,” President Rouhani said.

The President called for the implementation of Iran’s proposal dubbed as ˈWorld Against Violence And Extremismˈ to control extremism and terrorism in the world.

Four weeks of bloody fighting have killed more than 1,947 Palestinians and 67 people on the Israeli side, most of them soldiers.

The UN says around three quarters of those killed in Gaza were civilians, around a third of them children.

On the ground, Gazans endured yet another day of fear Sunday as the air force hit dozens of targets, killing four Palestinians only hours before the ceasefire went into effect.