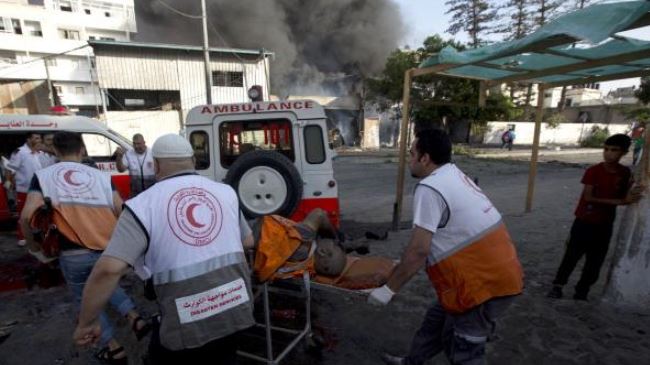 This file photo shows victims of Israeli massacre of Gazans in Shejaiya market.

Israeli army sources say pictures of a devastated Gaza neighborhood have been distributed among Israeli soldiers as a memento.

The photos, showing Gaza’s Shijaiyah district before and after Israel’s destructive attacks, were circulated among soldiers who were engaged in the aggression in the Palestinian coastal enclave.

On July 20, dozens of people lost their lives and many others injured in Israel’s brutal massacre of Palestinians in Gaza’s eastern Shejaiya district.

Witnesses said bodies of Palestinian women and children were lying on the ground after Israel attacked the Shejaiyah neighborhood in Gaza, forcing thousands of panicked civilians to flee.

The Israeli army reportedly prevented ambulances and emergency services from reaching the area.

Satellite images provided by a United Nations training organization also showed the damage to buildings from Israeli airstrikes across Gaza. The images, snapped by the Pleiades satellite, published by the United Nations Institute for Training and Research, compared the way a northeastern section of Gaza looked on July 6 — two days before the start of Israel’s offensive — and on July 25.

This comes as a senior Israeli official says the ongoing indirect talks with Palestinian delegates in Cairo on a lasting truce have made no progress.

According to the unnamed official, gaps between the two sides are still very wide.

Meanwhile, Israeli Prime Minister Benjamin Netanyahu, who was expected to discuss the Cairo talks with his security cabinet on Tuesday, called off the session.

Israeli and Palestinian negotiators are to discuss Israel’s blockade on Gaza. The lifting of the blockade has been one of the main Palestinian demands.

The Egyptian-mediated talks have entered their second day while a 72-hour truce is in effect on the ground in Gaza.

Over 1,940 Palestinians, including 470 children, have lost their lives and nearly 10,000 have been wounded since the Israeli military unleashed fatal assaults on the densely-inhabited strip on July 8.