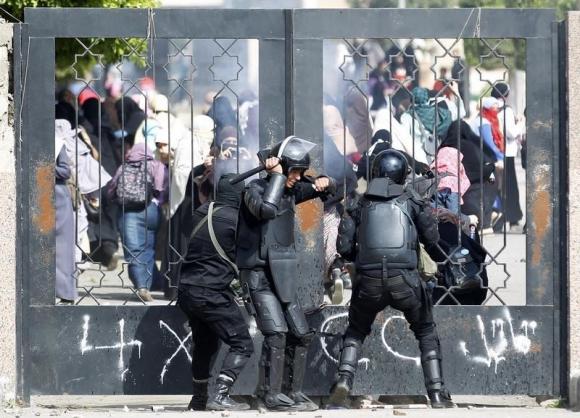 (Reuters) – The killing of hundreds of Egyptian demonstrators at two protest camps last year was systematic, ordered by top officials and probably amounts to crimes against humanity, Human Rights Watch said on Tuesday, calling for a U.N. inquiry.

In a 188-page report based on a year-long investigation, the New York-based group urged the United Nations to look into six incidents involving killings by security forces of supporters of elected Islamist President Mohamed Mursi, who was overthrown by the army on July 3, 2013, following several days of protests.

Hundreds of supporters of Mursi’s Muslim Brotherhood have been killed and thousands arrested since he was ousted, with the largest number of deaths taking place during the storming of two protest camps by security forces on August 14, 2013.

The report said 817 protesters were killed during the clearing of the Brotherhood sit-in at Cairo’s Rabaa al-Adawiya and compared it to the 1989 massacre of protesters around China’s Tiananmen Square.

“In Rabaa Square, Egyptian security forces carried out one of the world’s largest killings of demonstrators in a single day in recent history,” HRW Executive Director Kenneth Roth said in a statement marking the release of the report.

“This wasn’t merely a case of excessive force or poor training. It was a violent crackdown planned at the highest levels of the Egyptian government. Many of the same officials are still in power in Egypt, and have a lot to answer for.”

A government official contacted by Reuters declined to comment until the report was published. Egyptian officials, who deem the Brotherhood a terrorist group, have said some protesters were armed and fired at police and soldiers.

Before the dispersals, officials including then-army chief Abdel Fattah al-Sisi, who is now president, had called for the sit-ins to be cleared, citing concerns over traffic, public disturbance and possible violence.

The Interior Ministry said 62 security officers died in violence across Egypt on Aug. 14. About 275 police have been killed in attacks over the past year, it said.

HRW acknowledged that protesters threw rocks and petrol bombs at security forces, while a few opened fire, but said this failed to justify the level of force deployed by the state.

“Given the widespread and systematic nature of these killings, and the evidence suggesting that they were part of a policy to use lethal force against largely unarmed protesters on political grounds, these killings most likely amount to crimes against humanity,” the report said.

It urged governments to suspend military aid to Cairo until it takes steps to end serious rights violations, potentially turning up the pressure on Western allies who have voiced concern about Sisi’s democratic credentials but continue to provide military and other support to Cairo.

The report called on the U.N. Human Rights Council to establish an international commission of inquiry to investigate “the mass killings of demonstrators since June 30, 2013”.

“Criminal charges should also be brought against those implicated in these acts, including in courts that apply the principle of universal jurisdiction,” it said.

The report calls Sisi a “principal architect” of the violence, sitting at the top of the army’s chain of command.

The report also named Interior Minister Mohamed Ibrahim, saying his remarks on television two weeks after the dispersal show that instead of using force as a last resort, officials had estimated losing “10 percent of the people”.

An Interior Ministry statement about the events, published on Saturday, said security forces only launched the crackdown after efforts to persuade protesters to leave peacefully failed. It said security forces issued a final warning to demonstrators before the assault and established “safe exits” for those who wanted to leave once police and soldiers moved in.

Based on interviews with 122 witnesses, including residents unsympathetic to the protesters, and a review of video footage, HRW concluded security forces left no safe exit for most of the 12-hour assault and at times fired on those seeking to escape.

Sisi went on to win a presidential election and vowed that the Brotherhood would cease to exist under his rule.

Once Egypt’s best organized and most successful political movement, the Brotherhood has seen thousands of members detained and many sentenced to death since Mursi’s overthrow. It says it is a peaceful group.

Though the Brotherhood was initially singled out, Egypt has since targeted secular activists prominent in the 2011 uprising that toppled Hosni Mubarak.

HRW accused Egypt on Monday of trying to silence criticism after Roth and a colleague were held at Cairo airport and then denied entry to the country as they traveled to launch the report. Airport authorities said they had been turned back on instructions from security officials.