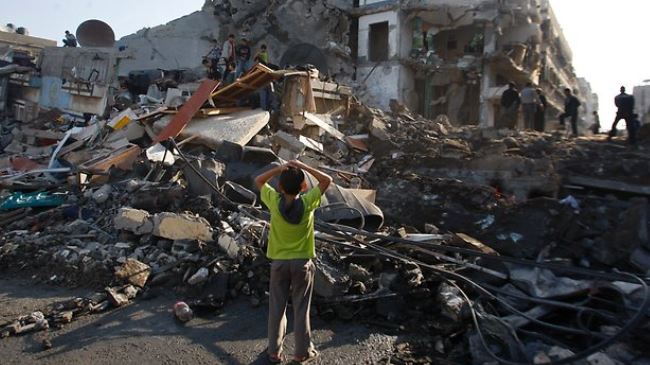 A senior UN humanitarian official says there will be no end in sight to the fighting in the Gaza Strip unless Israel lifts the blockade on the impoverished territory.

James Rawley, the top UN humanitarian official for the Palestinian territories, made the comments in Gaza City during an interview with the AFP news agency, published on Monday.

Rawley said the crippling blockade must be removed to let the people of Gaza rebuild the war-torn enclave and trade with the outside world.

“The blockade must be lifted not only to get material into Gaza in order to rebuild it but to allow Gaza to do what it was doing very well just 10 years ago, to trade with the outside world,” said Rawley.

The UN official warned that if Tel Aviv does not end the siege, another round of fighting was “likely.”

“Not only will we see very little in the way of reconstruction, but I am afraid that the conditions are in place for us to have another round of violence like we’re seeing now,” Rawley said.

Furthermore, the UN official slammed the international community’s failure in protecting Palestinian people during more than a month of Israeli aggression on Gaza.

According to Rawley, the Israeli strikes destroyed over 10,000 houses and “a large part” of Gaza’s industry. In addition, nearly half of Gaza’s agricultural land has been destroyed, leaving nearly 300,000 people without work.

The UN official added that 500,000 people, a third of Gaza’s population, are displaced within the besieged enclave.

Some 1,940 Palestinians, including 470 children, have so far been killed and nearly 10,000 others injured in the Israeli military aggression against Gaza, which began on July 8. Israeli military says three civilians and 64 Israeli soldiers were killed in the offensive, but Palestinian resistance movement of Hamas puts the number at more than 150.