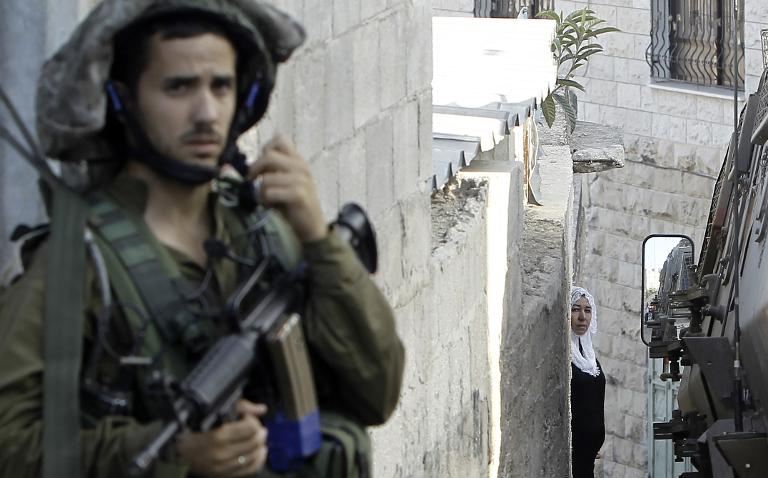 A Palestinian woman looks at an Israeli soldier standing in a street of the West Bank village of Qabalan during an operation by the Iraeli army aimed at tracking down Zacharia Akra, a Palestinian militant from Fatah on August 11, 2014

A 72-hour ceasefire took hold in Gaza Monday, as Israeli and Palestinian negotiators headed to Cairo in search of a long-term solution to end over a month of deadly fighting.

The truce which began just after midnight (2101 GMT on Sunday) was the fruit of days of Egyptian-brokered mediation to stem more than four weeks of violence which has killed 1,939 Palestinians and 67 on the Israeli side since July 8.

Ten hours into the truce, the skies over Gaza remained calm, with no reports of violations on any side and signs of life emerging on the streets of the wartorn coastal enclave which is home to 1.8 million Palestinians.

As the sun rose on Gaza City, shops and businesses began opening their doors and a handful of people could be seen doing their early shopping.

Outside a UN-run school, a clutch of cars and donkey carts waited to take some of the refugees back to homes they had fled during the fighting.

“We want to go back to see what happened to our house,” said Hikmat Atta, 58, who had piled his family into a small cart and was heading back to his home in the northern town of Beit Lahiya which they had left in the first days of the war.

But with the truce still in its early stages, he was not taking any chances.

“We’re just going back for the day, at night we’ll come back here,” he told AFP.

Egypt urged the warring sides to use the three-day lull to reach “a comprehensive and permanent ceasefire,” after efforts to extend a similar truce last week collapsed into a firestorm of violence.

UN Secretary-General Ban Ki-moon said it would give the two sides “another chance to agree on a durable ceasefire” while stressing the importance of addressing “the underlying grievances on both sides.”

Hamas, the de facto power in Gaza, has conditioned its agreement for any permanent agreement on Israeli lifting its eight-year blockade on Gaza.

“We insist on this goal,” Hamas’s exiled leader Khaled Meshaal told AFP in an exclusive interview in Doha on Sunday.

“In the case of Israeli procrastination or continued aggression, Hamas is ready with other Palestinian factions to resist on the ground and politically.”

The team was to resume Egyptian-mediated talks it had abandoned on Friday after Hamas refused to extend an earlier truce and resumed its fire on southern Israel.

Israel had pledged to send its negotiating team back when the truce took hold.

Palestinian delegates in Cairo said they would be happy for Abbas’s Palestinian Authority to take over the reconstruction of Gaza and execute any agreement reached in Cairo.

Israel has no direct interface with Hamas, whose charter calls for the destruction of the Jewish state.

“The national unity government and the Palestinian Authority will take over the execution of all that will be agreed upon during the truce talks,” Azzam al-Ahmed, head of the Palestinian delegation, told reporters.

“We are backing the setting up of a national body to be formed by president Abbas, which will take over the reconstruction (of Gaza),” said senior Hamas official Ezzat al-Rishq.

“The president of the body should be professional, credible and one who will be accepted internationally.”

The new truce deal followed a similar arrangement last week which had brought relief to millions on both sides of the border.

Hamas had refused to extend the 72-hour lull when it expired on Friday, and Israel accused the Islamist faction of breaching the agreement in its final hours with rocket attacks.

In the gap between ceasefires, warplanes hit more than 170 targets, killing at least 19 people, while the Palestinians fired at least 136 rockets at Israel, of which 93 hit and 13 were shot down, with the rest falling short inside Gaza, the army said.

The UN says just under three quarters of those killed in Gaza were civilians. Around a third of the civilian victims were children.

Israel said it closed its Kerem Shalom crossing used to truck supplies into the southern Gaza Strip after it was struck twice by rocket fire.

The resumption of fighting had put Netanyahu under increased pressure from hardliners to send ground troops back in to Gaza to topple Hamas.