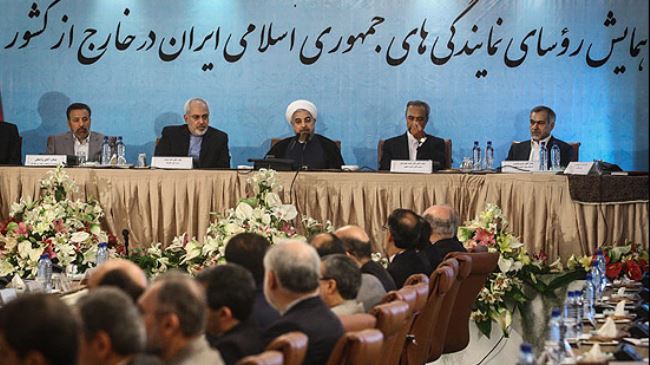 Addressing a gathering of Iranian ambassadors and envoys overseas in Tehran on Monday, President Rouhani said Israel’s crimes against the Palestinian people were so atrocious that even some of its supporters fell short of backing the regime.

The Israeli war on the Gaza Strip began on July 8. According to Palestinian health officials, the overall Palestinian death toll has reached nearly 1,940, with most of the fatalities being civilians. Nearly 10,000 others have also been wounded in the attacks.

The Israeli military says 3 Israeli civilians and 64 soldiers have been killed in the conflict, but Palestinian resistance movement Hamas puts the fatalities at more than 150.

Rouhani also referred to the nuclear talks between Iran and the five permanent members of the UN Security Council plus Germany and said Tehran is open to constructive interaction.

The Iranian chief executive, however, reiterated that Iran will not retreat from its legitimate rights, underscoring that the country’s national interests are the “red line” in the negotiations.

“We seek closer relations with the world; however, we defend our rights, interests and national security,” he said.

Iran and its six negotiating partners are holding talks to reach a final agreement aimed at resolving the standoff over Tehran’s civilian nuclear work.

The two sides signed a historic interim deal in Geneva last November. The agreement came into force on January 20 and expired six months later on July 20.

In July, Tehran and the six states agreed to extend their discussions until November 24 in a bid to work out a final accord.