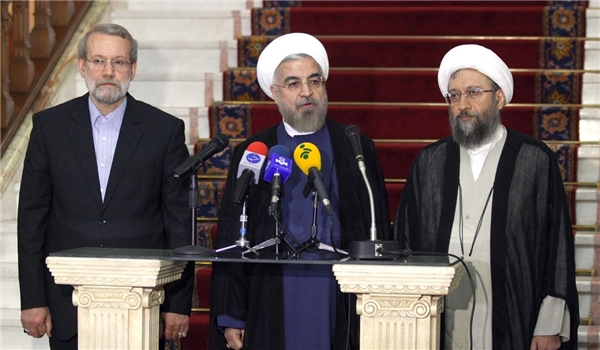 TEHRAN (FNA)- Iran’s President Hassan Rouhani and Judiciary Chief Sadeq Amoli Larijani, in separate messages, extended their condolences to the families of the victims of the Sunday morning plane crash near Tehran.

Addressing the Cabinet session on Sunday, President Rouhani expressed his grief at the deadly incident and wished the bereaved families patience, and good health for the wounded.

He tasked Iranian Health Minister Hassan Qazizadeh Hashemi with taking all the necessary measures to provide the injured with the best medical treatment and care.

In his message, Amoli Larijani urged the country’s judiciary officials, including the State Inspectorate Organization of Iran, the Attorney General of Tehran and the Revolution Court to find the cause of the incident and declare the results.

The Iran-140 Sepahan Airliner had just taken off from Mehrabad Airport when it crashed on the outskirts of the capital at 09:20 (0450 GMT) on Sunday.The passenger plane, carrying 48 passengers and crew members, was bound for Tabas in Eastern Iran when it crashed in Azadi township just 5km to the West of Tehran.

Eye witness accounts said the pilot lost control at the end of the runway and crashed the plane into the ground although he managed to take off and fly for seconds.

The latest FNA reports from the crash scene said that the pilot was a Ukrainian, adding that 39 passengers, including five who had been thrown out during the crash, were killed in the incident. Three of the victims died on the way to the hospital aboard a rescue helicopter. Nine of the passengers survived the incident, but have been badly wounded. Firefighting squads controlled the fire caused by the engine blast, and rescue and relief squads then conducted the search operations. Emergency teams who rushed to the scene following the incident said 3 to 7 passers-by had also been wounded in the incident.

Managing-Director of Iran’s Airport Company Mohammad Ilkhani said the plane was carrying 40 passengers and 8 crew (including the pilot, co-pilot, two flight technicians, two hostesses, and two flight security guards). Ilkhani confirmed that the pilot was about to take off at the end of the runway when he lost his starboard engine and crashed the plane seconds after take-off.

Ilkhani later informed FNA that the pilot had informed the control tower of an engine malfunction as he was taking off, but communication was lost as the plane crashed.

According to Iranian aviation officials, the bodies of 38 dead passengers have so far been retrieved from the debris, while another one died at a nearby hospital.

The plane crashed in an open area in a military zone belonging to the Iranian Defense Industries 6km (4 miles) to the East of the airport and close to Tehran’s Azadi Sports Complex.

The fuselage smashed into pieces during the incident with the tail landing onto a street and the cockpit and front seats smashing into the concrete wall of a glass manufacturing factory.

“The passers-by and people living in the area should thank God since the body tail hit an area only 500 yards away from a local market,” one of the eyewitnesses said.

Meantime, Head of the IRGC Public Relations Department General Ramezan Sharif strongly rejected some reports that the plane belonged to the IRGC.

Deputy Road Minister Ahmad Majidi said the Aviation Organization of Iran has sent a team to the crash scene to study the possible cause of the incident, adding that the team has found the black box.

Police and security teams have cordoned off the crash scene.

Later on Sunday, Iran banned all its Antonov-140 (which is known under the trademark Iran-140 as it is assembled in Iran) passenger planes from flying.

Iranian Minister of Roads and Urban Development Abbas Ahmad Akhoundi was tasked with carrying out a thorough investigation into the causes of the incident.