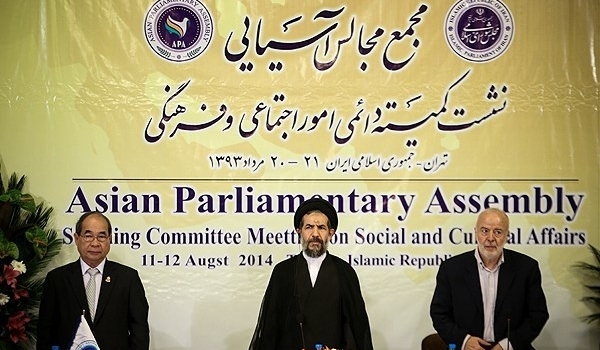 TEHRAN (FNA)- Iranian Parliament’s First Vice-Speaker Mohammad Hassan Aboutorabifard strongly condemned the recent Israeli attacks on the defenseless Palestinians in the Gaza Strip, and called on the international community to bring the war criminals in Tel Aviv to justice.

“The International Community should bring the Zionist war criminals to Justice,” Aboutorabifard said, addressing a meeting of the Asian Parliamentary Assembly (APA) in Tehran on Monday.

He noted that according to the latest UN facts and figures over 1,900 people most of them civilians, including 408 children, have been killed in airstrikes and missile attacks of Israel, and said, “More than half a million Palestinian people have become homeless and at least 10,000 buildings, including houses, hospitals, schools and mosques, have been destroyed in the Gaza Strip.”

He called on the APA secretariat to prepare a precise and documented report on the extent of the destructions specially at the historical sites to help properly identify the dimensions of the cultural and historical tragedy in the Gaza Strip.

The APA was born in 2006 at the Seventh Session of the Association of Asian Parliamentary for Peace (AAPP). In other words, the APA is continuation of an organization which was established in 1999.

Last week, Iran’s Judiciary Chief Sadeq Amoli Larijani blasted the Zionist regime for its atrocities against the Palestinian people, and said the Israelis are committing war crimes in Gaza.

“The Zionists’ crimes are beyond imagination; they have left 2,000 martyrs and over 10,000 injured people, destroyed many residential buildings and even didn’t deny demolishing hospitals, schools and mosques in an area stretched over only a few tens of square kilometers within two or three weeks,” Amoli Larijani said, addressing high-ranking Judiciary officials in Tehran.

“These actions are war crimes,” he underlined.

Amoli Larijani blasted the Islamic governments for their weak reaction to the crimes, but, meantime, said the people of Gaza have grown more powerful than the past, and the Zionist regime which thought it could defeat the resistance in a few days has now withdrawn from Gaza with humiliation.

His remarks came after the Palestinian Authority announced its determination to sue Israel at the International Criminal Court (ICC) for its war crimes against Palestinian civilians in its nearly one-month terror campaign on the Gaza Strip.

“Everything that has happened in the last 28 days is clear evidence of war crimes committed by Israel, amounting to crimes against humanity,” Palestinian Foreign Minister Riad al-Malki told reporters after meeting prosecutors at the ICC on Tuesday.

“There is no difficulty for us to show or build the case. Evidence is there … Israel is in clear violation of international law,” he added.

The complaint filed by Palestine details war crimes committed by the Israeli army over the past few weeks in Palestine.

Legal experts say the complaint is valid although the Palestinian Authority (PA) has yet to sign up to the Hague-based ICC.

Palestine is a non-member observer state at the United Nations and its ICC membership has been delayed only because of political quarrels.

Al-Malki has also asked the UN to end what he called Israel’s impunity, saying Tel Aviv must be held accountable for its crimes in Gaza.

The development comes days after the UN Human Rights Council passed a resolution calling for an independent probe into Israel’s war crimes in Gaza.

Meanwhile, Amnesty International has urged the United States to halt fuel shipments to the Israeli military due to mounting evidence of war crimes.