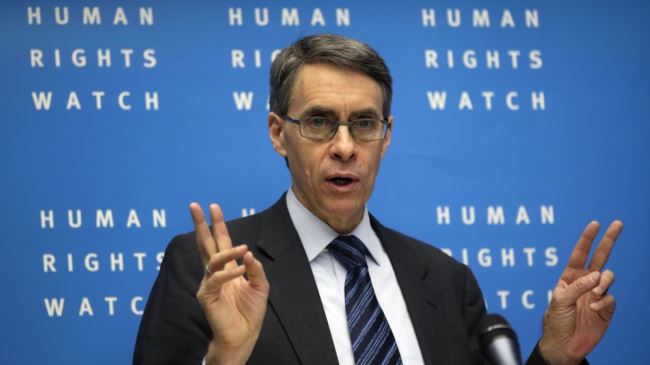 Egyptian authorities have barred the executive director of Human Rights Watch (HRW) and another senior staff member from entering the country ahead of the release of a report by the organization on mass killings in the country last summer.

The senior Human Rights Watch staffers were to brief diplomats and journalists on the findings of their investigation into the bloody events in July and August last year following the ouster of Egypt’s first democratically-elected president Mohamed Morsi.

The report documents the deaths of hundreds of anti-government protesters killed in six different incidents, including the security raid on a sit-in of the Morsi supporters at Cairo’s Rabaah el-Adawiyah Square on August 14, 2013.

At least 624 people were killed during 12 hours of mayhem as Egyptian security forces crushed the pro-Morsi sit-in.

“It appears the Egyptian government has no appetite to face up to the reality of these abuses, let alone hold those responsible to account,” Roth said in a statement.

Tweeting from the airport, Roth said the Rabaah “massacre was too ruthless for Egypt’s head-in-sand approach to work. Barring HRW won’t make the world forget.”

Morsi was toppled on July 3 last year in a military coup led by Abdel Fattah el-Sisi, Egypt’s current president and then army commander.

Sisi is accused of leading the suppression of Muslim Brotherhood supporters as hundreds of them have been killed in clashes with Egyptian security forces over the last year.