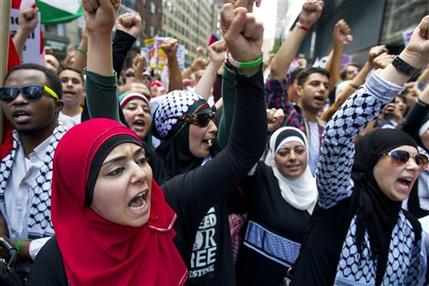 Supporters of ending the violence in Gaza yell at a rally near Columbus Circle during a protest in New York, Saturday, Aug. 9, 2014. (AP Photo/Craig Ruttle)

NEW YORK (AP) — A sea of Palestinians and their sympathizers lined Manhattan streets Saturday, marching to the United Nations and shouting that Israel’s response to missile attacks was genocide that took children’s lives.

“What they’re doing is wrong,” said Ayia Mustafa, 12, of the New York borough of Bronx. “I’m here to protest what’s going on in Gaza. What’s going on is wrong – bad things like killing children.”

She was among about 500 demonstrators who walked to the United Nations on Manhattan’s East Side after gathering behind police barricades off Columbus Circle to protest Israeli actions in the Gaza Strip.

Hamas, which the United States and other countries consider a terrorist organization, governs much of Gaza.

In midtown Manhattan, police on motorcycles stood by, engines revved up to accompany the marchers before they peacefully headed toward the United Nations building.

“We are all Palestinians and because of the occupation there is no justice in Gaza,” said Zouleikha Ban, 57, a native of Algeria who lives in the borough of Staten Island.

Several days previously, hundreds of Palestinian supporters marched and demonstrated in front of a midtown Manhattan office building after a 72-hour humanitarian cease fire broke down in Gaza. They said then they would hold more rallies as the conflict continues.

Behind metal police barricades at Columbus Circle on Saturday, demonstrators chanted: “Free, free Palestine! Occupation is a crime!” Organizers called for an end to U.S. aid to Israel.

Allaa Mustafa, Ayia’s 14-year-old sister, said they’re both American citizens. “But if we went to Gaza, we’d have more rights than Palestinians there,” she said.

Some tapped into the history of the region.

Mostafa Asadi, an engineer from Philadelphia who came to New York for the protest, said the current violence in the Middle East started more than six decades ago.

“The Zionists took Palestinian land and expelled them in 1948, and now Israel is trying to control the area,” said Asadi, 55, an Iran native who hoisted a sign that said: “Stop the U.S.-Israeli blockade of Gaza.”

“The Israelis are racist,” said Asadi.