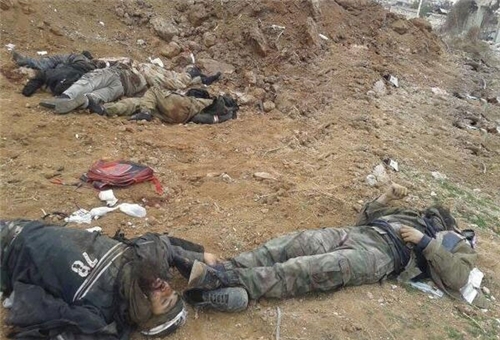 TEHRAN (FNA)- Iraqi security forces killed tens of Takfiri militants, including a notorious ISIL commander, in the Western parts of the country.

Nabhan Hamid Jabar Al-Jamili, a senior commander of the Islamic State of Iraq and the Levant (ISIL), was killed in Al-Karameh region of Al-Anbar province in Western Iraq on Sunday.

Al-Jamili and his militants had claimed responsibility for the raping 60 teenage girls in Al-Sabihat, Al-Lahib and Albu Khanfar villages in Al-Karameh region, Al-Youm Al-Samen news website quoted an Iraqi security official as saying on Sunday.

Meantime, a local official said that more than 74 ISIL terrorists have been killed in Touz Khormatu, Fallujah and Mosul over the past 24 hours.

On Saturday, the Iraqi air force destroyed an ISIL convoy of 18 vehicles in Anbar, killing all the terrorists inside the vehicles.

The Iraqi air force in coordination with the military intelligence destroyed the vehicles in Ana and Hadetha areas of Anbar province.

“All of the terrorists, who were inside the vehicles have been killed as well,” a security source said.