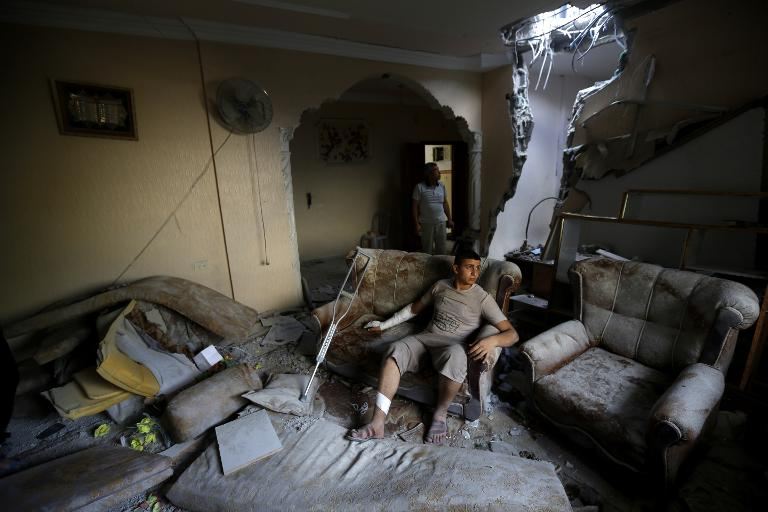 An injured Palestinian man sits inside his house after it was hit by an Israeli military strike in the Jabalia refugee camp, in the northern Gaza Strip, on August 10, 2014

Israeli warplanes kept up their pressure on Gaza Sunday as truce talks in Cairo faced moment of truth with the Palestinians threatening to bolt unless Israel returned to the table.

Gazans had another sleepless night as the air force struck 20 targets across the enclave, although nobody was killed. But the rocket fire only started at dawn, after which six mortar shells struck the south, causing no harm or damage, the army said.

Since a 72-hour truce ended on Friday, Gaza has been plunged back into an abyss of violence, with the Israeli military hitting 150 targets and killing 15 people, and Palestinian militants firing more than 100 rockets over the border.

So far, Egyptian efforts to broker an end to more than a month of fighting have led nowhere, with Israel pulling its team out of talks in Cairo on Friday after Hamas refused to extend the three-day ceasefire and resumed its rocket fire.

Prime Minister Benjamin Netanyahu told his cabinet on Sunday that Israel “will not engage in negotiations under fire”.

The statement came shortly after the Palestinians warned they would leave Cairo if Israel refused to show up by 1300 GMT.

There was no let up in violence on the ground, where a 17-year-old boy was killed in an Israeli strike on central Gaza, medics said.

In Gaza City, all the shops were shuttered on Sunday with fear keeping people off the streets, but there was also a sense of deep frustration.

“We are tired. We just want to go home, but we want something in exchange for all our suffering,” 27-year-old Samar Mohammad told AFP.

“I feel frustrated but I am confident that Israel will cave in and accept the demands of the resistance or Hamas will keep firing rockets until they do,” said Shadi Abu al-Heytan, 35.

In the West Bank, medics said an 11-year-old Palestinian boy was killed in a shooting that witnesses accused Israeli soldiers of carrying out. The military said it was looking into the reports.

Mussa Abu Marzuq, deputy head of Hamas’s exiled leadership, accused Israel of stalling over its demands and said Sunday would be crucial for deciding “the fate of the negotiations”.

“We do not want an escalation, but we will not accept that there is no reply to our demands,” he said late Saturday.

The Palestinian delegation, which includes Palestine Liberation Organisation officials as well as senior figures from Hamas and Islamic Jihad, was holding further talks with Egyptian mediators from 0800 GMT, an official said.

But there appeared little chance of a breakthrough.

“The prospects of reaching an agreement are weak and the Palestinian delegation could leave Cairo at any moment,” Izzat al-Rishq, member of the Hamas politburo, tweeted shortly before the talks began.

Meanwhile, Netanyahu held talks with his cabinet at the defence ministry in Tel Aviv, with hardliners exerting pressure him to send troops back into Gaza to topple Hamas, the de facto power in the battered Palestinian enclave.

Israel withdrew its forces from Gaza on August 5, wrapping up a nearly three-week ground operation aimed at destroying a network of cross-border attack tunnels.

“This situation cannot continue,” Foreign Minister Avigdor Lieberman said ahead of the meeting.

“There is no doubt that the only thing left to do now is to overpower Hamas, clean out the territory and get out as quickly as possible.”

“What we must do is break the military power of Hamas in Gaza,” he said, without elaborating.

Last week’s pullout of Israeli ground troops and the subsequent three days of calm brought relief to millions after four weeks of bloody fighting which has killed more than 2,000 Palestinians and 67 in Israel, most of them soldiers.

UN figures show that nearly three quarters of the victims were civilians, with children making up around a third of the civilian death toll.

France, Britain and Germany on Saturday demanded an immediate halt to the ongoing hostilities in a joint declaration which said a ceasefire must address “both Israeli security concerns and Palestinian requirements regarding the lifting of restrictions on Gaza,” it said.

Lifting Israel’s eight-year blockade on Gaza is the main Palestinian demand at the truce talks.

On Saturday, a Palestinian official said they had agreed with Egypt on a draft proposal which would be handed to Israel.

It would see Egypt and the Palestinian Authority take control of the Rafah border crossing, while negotiations on the establishment of a sea port in Gaza, which Hamas has demanded, would then be delayed and entrusted to the PA, which – unlike the Islamist movement – has an interface with Israel.