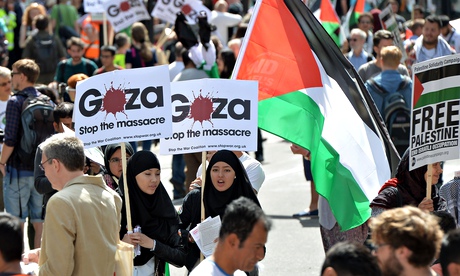 Gaza protests: tens of thousands gather in London to call for end to conflict

Protesters will march past the US embassy in Grosvenor Square before ending at Hyde Park with a rally. Photograph: John Stillwell/PA

Thousands of protesters gathered in London on Saturday to call for an end to Israeli military action in Gaza.

Police estimated that about 20,000 people took part in the march, which started at Oxford Circus and passed by the US embassy in Grosvenor Square to end in Hyde Park.

The Stop the War coalition, which organised the protest, said it was expecting up to 100,000 people.