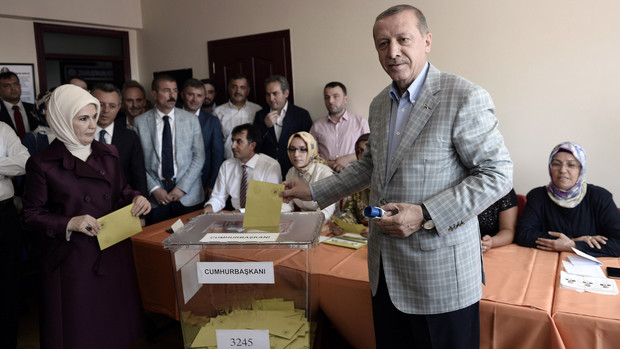 Prime Minister Recep Tayyip Erdogan’s likely victory in the first direct presidential election extends his decade-long leadership of Turkey and empowers him to follow through on pledges to hit back at foes and build a “new Turkey.”

Erdogan won 53 percent of the vote, enough to avoid a run-off, state-run TRT broadcaster said. Ekmeleddin Ihsanoglu, the former head of the Organization of Islamic Cooperation, who was backed by several opposition parties, won 38 percent. Selahattin Demirtas, co-chairman of the pro-Kurdish party, won 9 percent. The results are preliminary.

The former mayor of Istanbul is bidding to transform the presidency from a ceremonial role into one that combines the head of state with the head of government. Erdogan’s tenure as premier has seen growth average 5 percent annually, with foreign investors pouring $78 billion into Turkish stocks and bonds since 2006. While giving a voice to an underclass of Islamic conservatives, his government has also jailed reporters and prosecuted hundreds for alleged plots to overthrow him.

“We are leaving bans, restrictions and injustices as a bitter memory in old Turkey,” Erdogan, 60, said at an Aug. 8 rally in the central city of Kayseri. “In the New Turkey, faiths won’t be denied, head scarf oppression has ended and God willing it won’t come back.”

All but 1 percent of Turkish citizens are Muslim and Erdogan has used religion to establish himself as the most powerful leader since Mustafa Kemal Ataturk founded the modern state in 1923. He’s done that in large part by rolling back Ataturk’s secular legacy in favor of what he says will be a “more pious generation.”

In a documentary aired last year called “The Master’s Story,” Erdogan said that as a child he sold water and bread on the streets of Istanbul and used the money to buy books.

“It is all but certain that Erdogan will use his strong personality and constitutional powers to continue running the government,” said Soner Cagaptay, author of “The Rise of Turkey: The 21st Century’s First Muslim Power.” “He will use formal powers including the right given to him by the constitution to chair the cabinet, as well as informal channels of power, most remarkably his feared and respected personality, which will enable him to single-handedly run Turkey.”

Erdogan’s win means he’ll have to step down as leader of the Justice and Development Partyto assume the presidency on Aug. 28. The party will then need to pick a new leader, who would then be appointed to head the government.

“Just as the sun came out today after a few days of rain, that’s the way our new leader Erdogan will dawn over the country’s horizon,” said Fatma Ural, 34, an Ankara homemaker.

Erdogan’s win was likely helped by a low turnout, Ersin Kalaycioglu, a political scientist at Sabanci University in Istanbul, said on CNN-Turk. Turnout probably fell to about 75 percent from almost 90 percent in local elections in March, Adil Gur, head of the A&G polling company, said on the same channel before the results were announced.

Ali Gormez, a 34-year-old worker in Ankara and a member of Turkey’s Alevi minority, said he would cast an empty ballot.

“None of the candidates’ characteristics appeal to us,” he said. “I can’t think of another course of action.”

Erdogan’s appeal to conservative social values is enhanced by sentiment among voters that he’s also made them richer. His party was swept into office in 2002 on the heels of a banking and currency crisis. Since then, inflation dropped to single digits, interest rates fell to record lows and Turkey paid off its International Monetary Fund debt. By 2023, Erdogan says he’ll make the $820 billion economy one of the world’s 10 largest — from 17th now.

“An administration that understands the importance of providing bread and jobs will continue to represent us,” said Ahmet Obuz, a 27-year-old municipality worker in Ankara.

Deeper economic challenges remain. Growth has been fueled by consumption and private-sector borrowing that swelled the current-account gap to 7.5 percent of gross domestic product in the first quarter. That’s the biggest among the so-called fragile five economies most vulnerable to a withdrawal of foreign investment needed to finance their deficits. South Africa, Indonesia, Indiaand Brazil are the other four.

Erdogan’s past 18 months were the most turbulent of his time in office, marred by protests following proposals to redevelop a park in Istanbul and a mining disaster in the town of Soma where 301 miners died.

Anger over the mine accident resulted in Erdogan being jeered by families on a visit to the town. One of his advisers was photographed kicking a protester who’d been detained by security forces.

His efforts to take economic power away from the Istanbul-based secular elite resulted in corruption allegations that he dismissed as stemming from a coup attempt.

With investors already citing Turkey’s vulnerability to a change in U.S. monetary policy, the lira fell to a record and yields climbed as graft allegations first surfaced in December.

Thousands of police officers, bureaucrats and prosecutors were subsequently removed following the probe, which Erdogan blamed on followers of a U.S.-based imam, Fethullah Gulen.

The Turkish lira appreciated for a first time in four days on Aug. 8, strengthening 1 percent to 2.1452 against the dollar. In the past year, it’s the fourth-worst performer among the major currencies tracked by Bloomberg, depreciating about 10 percent. Over the same period, two-yearbond yields have risen 62 basis points, closing at 9.36 percent on Aug. 8, the highest among 21 major emerging markets, except Brazil.

Erdogan has vowed to use his new powers to pursue those who he says tried to topple him.

“We’ve gone into their dens, we’ll keep going into their dens and those who created this structure will pay the price,” Erdogan said Aug. 7. “We’ll bring all of their filth into the open, we’ve showed how they betrayed the nation, we’ve documented how they’ve carried out espionage for other nations, and we’ll continue to do so.”

Erdogan also faces challenges presented by conflicts in Syria and Iraq, and over the Gaza Strip. After he lobbied for the overthrow of Syrian President Bashar al-Assad, an al-Qaeda breakaway group calling itself the Islamic State took over parts of Syria, then large swathes of Iraq. On June 11, they stormed the Turkish consulate in Mosul, capturing 49 people.

Erdogan also backed the short-lived Muslim Brotherhood government in Egypt, and on July 25 called Abdel-Fattah El-Sisi, who took over as Egypt’s president, “a tyrant.”

Relations between Turkey and Israel, long a model for ties between a Muslim nation and the Jewish state, have been hurt, with the two countries reducing diplomatic relations to a minimum. On Aug. 3, he said that “just as Hitler wanted to establish the Aryan race in Germany, the Israeli state is chasing after the same dream.”

In an interview with ATV television channel this week, Erdogan said he’d use powers that no previous president had ever used, including regularly chairing cabinet meetings.

“Others may not have used them, but I will,” Erdogan said. “That’s how we’re going to make this country fly.”