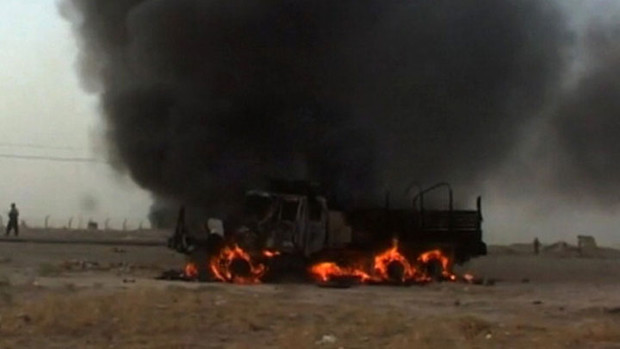 U.S. jets, drones hit militants in new round of strikes in Iraq

U.S. aircraft hit Islamic State militants in multiple airstrikes yesterday at the start of a sustained campaign to protect American personnel and prevent the massacre of ethnic and religious minorities in northern Iraq.

Jets and drones bombed an artillery installation, mortar positions and a militant convoy in three separate missions near Erbil, the Kurdish regional capital where the U.S. has diplomatic staff and an operations center where American military personnel are advising Iraqi forces.

President Barack Obama authorized the strikes after pleas from Iraq’s central government and Kurdish leaders trying to blunt the advance of the Sunni Islamic State, which has terrorized religious minorities and used beheadings to intimidate the civilian population.

Obama’s spokesman, Josh Earnest, said yesterday that the military action would be “very limited in scope” while declining to give a timeline for the operation.

The decision to authorize the airstrikes marks a shift for Obama, who made pulling the U.S. out of the war there the centerpiece of his first successful presidential campaign and then oversaw the withdrawal of combat forces from Iraq in 2011. The president has repeatedly said that the only way to end the insurgency was establishment of an Iraqi government that can unify Sunni, Shiite and Kurdish factions.

Obama and his aides emphasized that military force was necessary to protect U.S. personnel, with a secondary reason being the prevention of a humanitarian catastrophe caused by the Islamic State’s purge of ethnic and religious minorities.

“The protection of American personnel in Iraq is a top priority, and one that merits the use of military force,” Earnest said yesterday at the White House.

Obama is “determined to make sure that the United States is not dragged back into a prolonged military conflict in Iraq,” Earnest said.

Speculation that the U.S. strikes would stabilize the supply of oil from OPEC’s second-largest producer pushed crude prices lower. Brent for September settlement slid 42 cents, or 0.4 percent, to $105.02 a barrel on the London-based ICE Futures Europe exchange.

As the Islamic State seized more territory in recent days, Obama faced the threat of Americans in Erbil coming under siege and the prospect that thousands of Yezidis stranded in the mountains would die without immediate aid. The president’s authorization includes using airstrikes, if necessary, to break the siege at the base of the mountains.

Plans for military strikes and a separate humanitarian airlift came together quickly this week after Obama heard reports from U.S. intelligence, as well as from from Iraqi and Kurdish forces, according to an administration official who asked for anonymity to outline the private discussions.

Obama held two White House Situation Room deliberations on Aug. 7 — a 90-minute session during which he was told that a genocide could unfold without U.S. intervention, and a final two-hour huddle later that day, according to the official.

American military planes later that day dropped food and water for the Yezidis, who are threatened with starvation if they stay on the mountain, or slaughter if they attempt to leave.

About 36,224 meals have been dropped into Iraq to date, along with 6,822 gallons of drinking water, the U.S. Defense Department said in an e-mailed statement.

Kamil Amin, a spokesman for Iraq’s Human Rights Ministry, said as many as 400 of the besieged Yezidis have died in the mountains.

He accused the Islamic State of abducting hundreds of Yezidi women and using them as slaves and as human shields.

“They are facing a genocide and ethnic cleansing by Islamic State,” he said by phone from Baghdad.

Hoshiyar Zebari, Iraq’s foreign minister, said in a televised press conference from Erbil that with the air attacks by the U.S., government forces are now able to organize a counter-attack against the militants.

The Islamic State extremist group has conquered swaths of northern Iraq since June and this week seized the Mosul Dam, the country’s largest. The Islamic State has enriched itself by seizing infrastructure and energy assets as its makes military gains in Iraq and Syria.

The dam holds back water that, if unleashed, could flood Mosul, northern Iraq’s biggest city, and wreak damage as far as Baghdad. The dam is about 80 miles (130 kilometers) from Erbil. It was not clear whether the airstrikes will affect that battle.

There were conflicting reports yesterday on events on the ground. Hisham al-Brefkani, a member of the provincial council of Nineveh, said the Kurdish Peshmerga militia took back the town of Telkeif in Mosul as well as part of Mosul Dam.

That was denied by Zuhair Al-Chalabi, head of National reconciliation committee in Nineveh province, who said Islamic State is still in control of cities and towns as well as the dam. Residents in the area also said Islamic state fighters were still there.

In Mosul, which is controlled by Islamic State, electricity has been cut for a week, forcing residents to use generators and conserve with their electricity use amid surging fuel prices for generators.

People in the city have been conserving and buying only essential foods as businesses shut their doors and many government employees were not paid in two months as most state work has been halted since Islamic State swept the city.

The number of Islamic State fighters, patrolling the streets of Mosul, have steadily declined in the past week as many joined other fighters in battles against Kurdish Peshmerga forces, said a Mosul resident who asked not to be named for fear of retribution.

The Sunni militants’ offensive — and their threats to kill religious minorities — has panicked tens of thousands of people and emptied towns that for centuries have been home to Yezidi and Christian communities.

In his remarks delivered from the White House Aug. 7, Obama said he understood that the U.S. public is wary of any return to Iraq. He said the U.S. won’t be sending ground combat troops.

“I know that many of you are rightly concerned about any American military action in Iraq, even limited strikes like these,” he said. “As commander in chief, I will not allow the United States to be dragged into fighting another war in Iraq.”

Obama had held back on authorizing air strikes as the U.S has pressed Iraqi leaders to form a new government that excludes Prime Minister Nouri al-Maliki. U.S. officials consider Maliki, a Shiite, a divisive figure whose actions have pushed many minority Sunnis into an alliance with the radical Islamic State.

“What the president wants and what the president gets aren’t necessarily the same thing,” Stephen Biddle, a senior fellow in defense policy at the Council on Foreign Relations, said in an interview. “He clearly wants to limit the U.S. role. But the basic problem here is the kind of things he is talking about has no prospect of ending the war.”