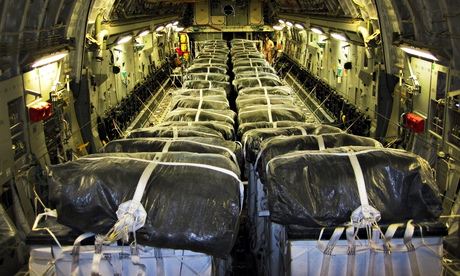 Pallets of bottled water are loaded on board a C17 transport plane for an airdrop to Iraqi refugees. Photograph: Sgt Vernon Young/US Air Force/EPA

WASHINGTON — The United States on Saturday continued its double-barreled efforts to address the crisis in Iraq, as three American military cargo planes, escorted by Navy F-18 fighter jets, dropped more food and water on Sinjar Mountain in northern Iraq to help tens of thousands of refugees stranded under threat from Sunni militants.

Defense officials said that the airdrops, the second in two days, occurred early Saturday morning. The humanitarian assistance came after a day of military strikes on Friday by Navy warplanes and Predator drones on artillery equipment and fighters with the Islamic State in Iraq and Syria, or ISIS.

On Saturday, the planes — one C-17 and two C-130s — dropped more than 28,000 meals ready to eat and more than 1,500 gallons of fresh drinking water, the Pentagon said. That brings the number of meals delivered to the refugees to 36,224 in the past two days.

President Obama announced on Thursday night that he had authorized the humanitarian relief effort, as well as military strikes if necessary, to break the siege on Sinjar Mountain.

The airstrikes were intended to destroy rebel positions around the Kurdish capital, Erbil, the American military said on Friday, and to halt the advance of ISIS militants toward Erbil, which is home to a United States Consulate and thousands of Americans.

The action was the return of the United States to a direct combat role in a country it left in 2011. Warplanes dropped 500-pound laser-guided bombs on a number of targets: a mobile artillery piece that was being towed from a truck and that had begun shelling Erbil, a stationary convoy of seven vehicles and a mortar position.

The military also used a remotely piloted drone to strike another mortar position on Friday afternoon. After the first strike, it said in a statement, ISIS militants “returned to the site moments later” and “were attacked again and successfully eliminated.”

Defense officials expressed confidence that they could achieve within a few days one of Mr. Obama’s stated goals: stopping the advance of the militants on Erbil.

Less certain was whether the other objectives Mr. Obama had announced — breaking the siege on tens of thousands of refugees stranded on Sinjar Mountain and protecting Americans in Baghdad — could be achieved as quickly, given the instability of Iraq’s internal politics and the difficulty of protecting and eventually evacuating the stranded people.

The leader of ISIS sent a defiant message to the Americans in an audio statement that was posted on YouTube in June and circulated again on Twitter on Friday.

“This is the message of the leader of the faithful,” the leader, known as Abu Bakr al-Baghdadi, wrote in a message addressed to “America, the defender of the cross.”

“You should know, you defender of the cross, that getting others to fight on your behalf will not do for you in Syria as it will not do for you in Iraq,” he said. “And soon enough, you will be in direct confrontation — forced to do so, God willing. And the sons of Islam have prepared themselves for this day. So wait, and we will be waiting, too.”

ISIS fighters had come within 25 miles of Erbil in a rapid advance that took American military planners by surprise.

Rear Adm. John Kirby, the Pentagon spokesman, said in a statement that ISIS fighters near the mortar positions had been “successfully eliminated,” although he did not say exactly how many had been killed. Another Defense Department official said that the precision of the laser-guided bombs dropped was such that in the case of the strike on the stationary convoy, “you know that vehicle and the people in it don’t exist anymore.”

The Navy fighters launched from the aircraft carrier George H. W. Bush, which has been deployed in the Arabian Sea.

Kurdish officials said the first round of American bombs struck on Friday afternoon in and around Mahmour, a town near Erbil. They reported an airstrike in the same location on Thursday, before Mr. Obama’s announcement; the Pentagon denied that American warplanes had carried out that earlier attack.

Kurdish fighters, known as pesh merga, have been pressed hard in recent days by the militants, who have seized several towns near Erbil from the Kurds and have taken the Mosul Dam, one of the most important installations in the country.

“The airstrikes are being led by the U.S.A., and pesh merga are attacking with Katyusha,” said Halgurd Hekmat, a spokesman for the Kurdish fighters, referring to a type of Russian-made tactical rocket.

Many members of religious minorities in northern Iraq, including Christians, have fled to Kurdish territory to escape the advancing militants, who have imposed harsh fundamentalist rule in areas they control. Others — including tens of thousands of Yazidis, who follow an ancient faith linked to Zoroastrianism and are stranded in a mountainous area to the west — have been trapped and besieged by the militants. Delivering humanitarian aid to that group is one of the purposes of the American operations in Iraq, Mr. Obama said.

Britain, a close ally and coalition partner of the United States in the wars in Iraq and Afghanistan, said Friday that it would not take part in the current military action but would provide humanitarian aid and technical help.

“What we have decided today is to assist the United States in the humanitarian operations that started yesterday,” the British defense secretary, Michael Fallon, said in London on Friday.

Turkey, a NATO ally that borders northern Iraq, said on Friday that it, too, would increase humanitarian aid to the region, news agencies reported.

Nikolay Mladenov, the United Nations’ top envoy in Iraq, said airdrops of aid on Friday had reached a fraction of the 100,000 people trapped on Sinjar Mountain. Mr. Mladenov has proposed a humanitarian corridor that would allow civilians to travel from the mountain to a safe zone in a Kurdish-controlled area. Late Friday, the United States military said it had made a second round of airdrops of food and water.

But the civilians are currently trapped between front lines. The fighting would have to stop to open such a corridor, or the warring parties would have to agree to let people pass into safety. Mr. Mladenov said negotiations were underway. “It’s a matter of days,” he said. “It depends on two things. First, how successful the airdrops can be — they’ve been there for a few days; there’s no access to water, food, medicine. Secondly, it depends on the security situation on the ground.”

While Kurds welcomed Mr. Obama’s announcement of American assistance, the reaction in Baghdad was mixed.

“Obama’s speech did not delight Iraqis,” said Hakim al-Zamili, a leader of a main Shiite bloc in Parliament, the Sadr faction, who were among the strongest opponents of American involvement in Iraq. “They are looking out for their own interests, not for ours.”

“They should have provided Iraq with weapons,” Mr. Zamili added, possibly alluding to the United States’ suspension of deliveries of F-16 fighter jets and combat aircraft to Iraq.

“They should have made this decision when hundreds of Shiites and Sunnis were being killed every day,” Mr. Askari said.

Mr. Askari accused the Obama administration of being interested only in “protecting the Kurdish regional government and Christians, not the rest of Iraq.”

“Iraqis must rely on themselves and their genuine friends, like Iran and Russia, who have supported Iraq in its battle against ISIS,” he said. Russia has sent Sukhoi aircraft to the Iraqi forces, and Iran has trained and financed militia forces and sent advisers.

The decision to announce American air operations on Thursday appeared to reflect a view among American, Kurdish and Iraqi military leaders that a crippling attack by the militants was more imminent than had been widely recognized. The militants’ seizure of two towns within 20 miles of Erbil stoked panic and the beginnings of an exodus of residents to Sulaimaniya, the largest city to the southeast.

Military leaders believed that if the city emptied, it would be more vulnerable to a militant attack, officials said privately, asking not to be quoted because they did not want to shake morale.

The airstrikes appeared to improve the mood in Erbil on Friday, at least temporarily, according to people there. Fewer cars were at the city gates trying to leave, they said.

“The bombing changed the mood of the people,” a pesh merga officer said.