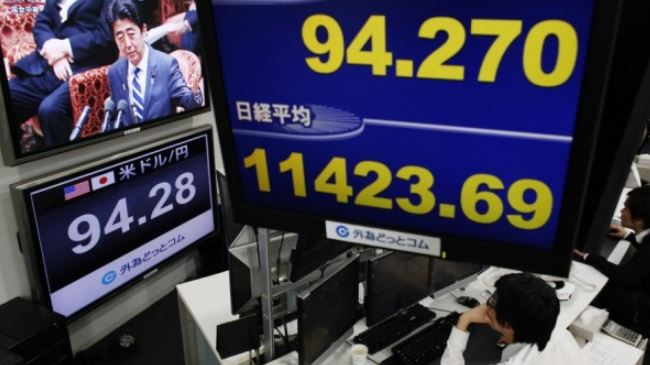 Japan stocks fall over US plans for airstrikes in Iraq

Tokyo’s stocks have dropped more than 3 percent following the decision by US President Barack Obama to authorize airstrikes against ISIL Takfiri militants in Iraq.

Investors in Japan reacted on Friday morning to an announcement by Obama, who said he had authorized the country’s military to carry out airstrikes against positions held by the Takfiri ISIL militants in Iraq.

The Nikkei 225 index lost as much as 3.14 percent to hit 14,753.84 after the US plan sparked a sharp rise in the value of yen. A stronger yen is bad for Japanese exporters, as it digs into their profitability and makes them less competitive overseas.

The dollar dropped to as low as 101.58 yen before recovering to 101.78 yen, but was still well down from 102.09 yen in New York late Thursday as geopolitical tensions weighed on the unit.

The yen is seen as a safe-haven currency, which investors tend to buy in times of uncertainty and turmoil.

Iraq crisis, Islamic State of Iraq and the Levant (ISIL), Japan stocks, Quoted, US, US attacks on ISIL August 9, 2014
Iran actor Peyman Moaadi stars in US film
RIPI ready for cooperation with PUT