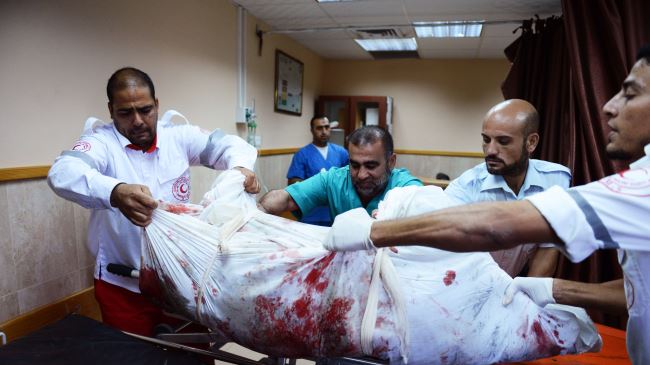 Hospital workers handle the remains of a man that was killed when the al-Qassam Mosque was targeted by an Israeli airstrike in Gaza City, August 9, 2014.

At least five Palestinians have been killed and several others injured in a series of fresh Israeli airstrikes on the besieged Gaza Strip.

Palestinian officials say at least two were killed in al-Maghazi refugee camp in central part of Gaza on early hours of Sunday.

Rescue workers say the bodies of another three have been pulled from the rubble at a mosque in Nusayrat, also in central Gaza.

The latest deaths bring to nine the number of Palestinians killed since early Friday when Israel resumed attacks after talks to extend a truce with Hamas failed.

The Israeli military sources have confirmed more than 30 airstrikes across the Gaza Strip on Saturday.

A senior Hamas official has said the group would not extend the truce because Israel has not responded to any of the Palestinian demands at the negotiations.

Palestinian resistance groups have also retaliated by launching a fresh barrage of rockets into Israel.

More than a dozen rockets have been fired at Israeli towns, with two landing outside Sdot Negev and Eshkol.

Nearly half of the Israeli communities near Gaza have reportedly fled their places of residence in recent weeks, expressing doubt over the prospect of any safe return to the area.

The Israeli military aggression against Gaza, which began on July 8, has claimed the lives of more than 1,900 Palestinians, including more than 400 children, and wounded about 1,000 others.

Meanwhile the Organization of Islamic Cooperation (OIC) says its executive committee will convene on August 12 in Jeddah, Saudi Arabia, for an extraordinary meeting with regard to the situation in Gaza.