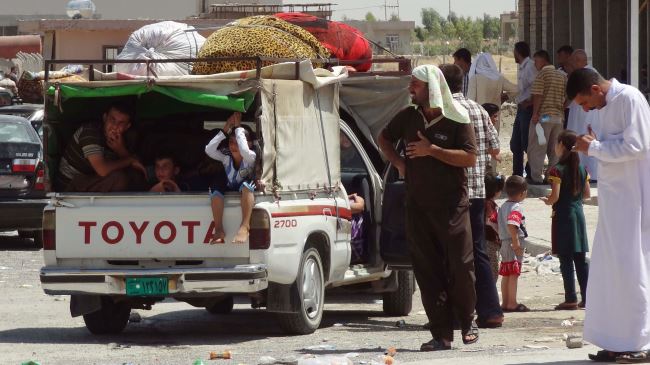 Shia Iraqi Kurds, known as Shabak, displaced by fierce fighting between Kurdish Peshmerga forces and ISIL terrorists wait on the road between Kirkuk and Arbil on August 8, 2014.

ISIL Takfiri terrorists have executed 17 civilians from the Shabak minority in Iraq’s northern province of Nineveh.

The head of the Shabak minority says the terrorist group has now seized around 60 villages north of the city of Mosul.

He urged the Iraqi air force to target the terrorists in northern areas.

He said the terrorists have killed over a hundred members of his Kurdish Shia community since the start of their attacks in June.

The ISIL offensive has forced thousands of people to flee homes.

ISIL militants have killed a large number of people in the territories they have captured across Iraq and Syria, and have summarily executed many of their captives.

In Iraq, the crisis escalated after the ISIL took control of Mosul, in a lightning advance on June 10.

More than a million people have been displaced in Iraq so far this year, according to estimates by the United Nations.

The ISIL Takfiri terrorists say they will continue their raid towards Baghdad.

Iraqi Prime Minister Nouri al-Maliki has said that the country’s security forces would confront the terrorists. He said in June that the seizure of Mosul was a conspiracy.

Iraqi soldiers have been engaged in heavy fighting with the Takfiri militants on different fronts and have so far been able to push them back in several areas.

The Iraqi prime minister has said that Saudi Arabia and Qatar are responsible for the security crisis and growing terrorism in his country, denouncing the Al Saud regime as a major supporter of global terrorism.