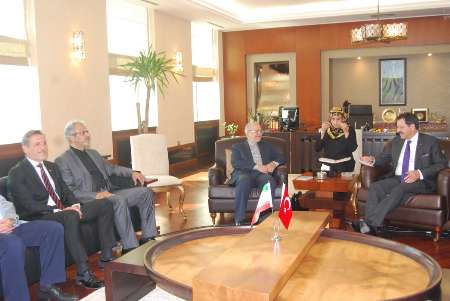 Ankara, Aug 9, IRNA – Iranian and Turkish officials in a meeting in Ankara discussed the ways for the further expansion of bilateral ties in economic and trade fields.

During the meeting in the Turkish capital on Friday, Iranian Industry, Mine and Trade Minister Mohammad Reza Nematzadeh and Head of Turkeyˈs Chambers and Bourses Refat Hesar Jikli Ouglu discussed the economy and trade as well as the ways for expansion relation s between the two countriesˈ private sectors.

ˈThe two countries are determined to expand their bilateral ties,ˈ Nematzadeh said during the meeting.

He pointed to the trend of implementation of preferential trade agreement, PTA) between Iran and Turkey in the near future and the recent agreement in the field of customs between the two countries, and said, ˈWe expect flourishing of bilateral relations in economic and trade ties in the coming weeks.ˈ