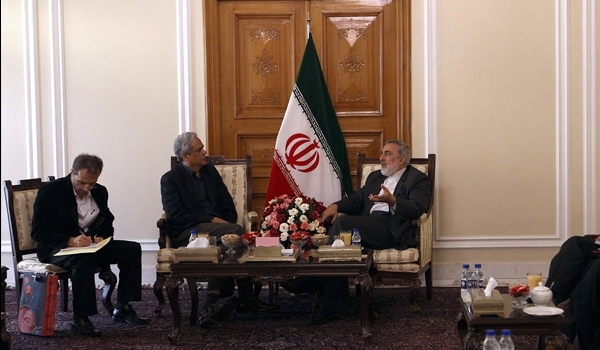 Envoy: Bangladesh seizes every opportunity to expand ties with Iran

TEHRAN (FNA)- Bangladeshi Ambassador to Tehran Khandakar Abdus Sattar underlined the positive and good relations between Tehran and Dhaka, and said his country spares no opportunity and efforts to further develop its relations with Iran.

He also described reciprocal parliamentary visits as a major contributor to the development and consolidation of the bilateral relations between the two countries.

Sheikholeslam, for his part, referred to the positive record of the relations between Iran and Bangladesh, and said, “The two nations’ abundant bonds and commonalities can create a proper ground for the further development and expansion of bilateral friendly ties.”

A four-member delegation comprising members of the parliament’s Women and Family Fraction, headed by Fatemeh Rahbar, arrived in Bangladesh on Sunday to discuss expansion of ties and cooperation with officials of the Asian country.

The visit by the Iranian parliamentary delegation took place at the invitation of Bangladeshi Parliament Speaker Dr. Shirin Sharmin Chaudhury.The Iranian lawmakers held meetings with Bangladesh’s prime minister, culture minister and a number of other senior officials during their five-day visit to Dhaka to discuss parliamentary ties and other issues of mutual interests.

In June, Iran and Bangladesh devised new plans to further develop their economic cooperation and relations through pursuing the agreements they have already signed.

He added that the agreement was made during a meeting of the Iranian and Bangladeshi delegations participating in the 39th annual meeting of the Islamic Development Bank in Jeddah, Saudi Arabia.

As a result of the meeting, Bangladesh’s Ministry of Commerce vowed to take necessary actions to prepare the ground for finalizing customs and taxing agreements already signed between the two countries, Alishiri said.

He said the Iranian delegation invited their Bangladeshi counterparts to visit Iran in September 2013, ahead of a meeting of the eight developing nations (D-8) finance ministers.

Iran and Bangladesh agreed to further increase their economic ties as the two countries’ fifth joint economic commission meeting wrapped up in Dhaka mid May 2013.

Iran and Bangladesh signed an economic cooperation agreement in a special ceremony in Dhaka at the time.

The ceremony was held on the sidelines of the two countries’ economic commission meeting and was attended by former Iranian Minister of Industry, Mines and Trade Mehdi Qazanfari and Bangladeshi Finance Minister Abul Maal Abdul Muhith.