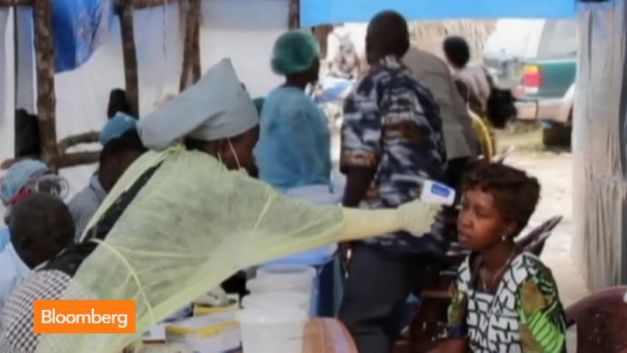 Aug. 7 (Bloomberg) — Cases of the Ebola virus in Nigeria are a national emergency that means “everyone is at risk,” Health Minister Onyebuchi Chukwu said. Bloomberg’s Yang Yang reports on the World Health Organization’s emergency meeting on the outbreak. (Source: Bloomberg)

“That the world would allow two relief agencies to shoulder this burden along with the overwhelmed Ministries of Health in these countries testifies to the lack of serious attention the epidemic was given,” Ken Isaacs, vice president of international programs and government relations for Samaritan’s Purse, said in written testimony to be delivered to a House subcommittee.

Isaacs said he privately told U.S. officials in mid-June that “the disease was spiraling out of control.”

Not until two Americans working in Liberia, Kent Brantly and Nancy Writebol, were revealed to be infected with the virus on July 26 was “serious international attention paid to the crisis,” Isaacs said in the testimony. Until then, Samaritan’s Purse and Medecins Sans Frontieres, or Doctors Without Borders, were left to combat the epidemic alone, he said.

A House Foreign Affairs subcommittee will hold a hearing today on the outbreak, which has killed at least 932 people in Sierra Leone, Guinea, Liberia and Nigeria since it was first reported in March, according to the World Health Organization. An official from SIM USA, another charitable group whose workers have been fighting the outbreak, will testify as well.

The American ambassador to Liberia declared a disaster there on Aug. 4, and since March the U.S. Agency for International Development has dedicated $14.6 million to try to help control the virus, Ariel Pablos-Mendez, the assistant administrator for global health at the agency, said in testimony prepared for the hearing.

The witnesses from Samaritan’s Purse and SIM USA described a hell-scape in Liberia, where doctors and nurses have fled the country or refuse to work, hospitals aren’t functioning and bodies of Ebola victims lie in the streets of the capital Monrovia, or in shallow, unsanitary mass graves.

The only place in Liberia to receive care is a Monrovia hospital operated by SIM and Samaritan’s Purse, said Frank Eugene Glover, a doctor representing SIM who will testify to the House subcommittee. The hospital has five doctors, 77 nurses and aides and space for 25 patients, he said.

“Attempts to expand the capacity to treat Ebola patients were resisted by the local community,” he said. “Protests began and health workers were assaulted.”

Local customs conflict with the effort to control the infection, Isaacs said, especially the funeral process for dead family members, which includes washing and kissing the bodies.

“The corpse of an Ebola victim is at its maximum point of contamination in the hours immediately following death,” he said. “Every contact with it will result in another infection.”

Local doctors have sometimes hampered the effort, he said. Many local health professionals aren’t familiar with Ebola and even deny that it’s real, he said. Two prominent doctors in Liberia, including a Liberian-American, examined Ebola patients at the isolation ward at a Monrovia hospital without using protective equipment, Isaacs said.

“These men were highly educated, credentialed and respected professionals, yet they did not believe in the existence or seriousness of the disease,” Isaacs said.

He didn’t name the Liberian-American doctor, who he said traveled to Lagos, Nigeria, before falling ill and dying. A Liberian-American doctor named Patrick Sawyer died in Lagos on July 25 after traveling from Liberia; a nurse who treated him has also died, and there have been five other cases in Lagos, a city of 20 million people, the Nigerian Health Minister, Onyebuchi Chukwu, said yesterday.

Pablos-Mendez said in his testimony that his agency is “currently assessing what additional assistance may be needed” in West Africa. USAID announced this week it would provide another $12.5 million to support work by government agencies and groups like Samaritan’s Purse.

Work to develop treatments for the disease should be accelerated, Isaacs said, and a regional group should be created to coordinate efforts by local health ministries in Africa to combat the virus.

The U.S. should also acquire more planes able to evacuate seriously ill patients from foreign countries, he said. The jet that transported Brantly and Writebol, on separate flights, is the only such plane in the country, he said.

U.S. President Barack Obama, in remarks yesterday, said the focus in Western Africa should be on shoring up the public health infrastructure there and containing the outbreak. “We’re focusing on the public health approach right now because we know how to do that,” Obama said.

The two Americans who worked with Samaritan’s Purse were evacuated to Emory University Hospital in Atlanta for treatment after they received doses of an experimental drug developed my Mapp Biopharmaceutical Inc. of San Diego. Both are in stable condition.

Officials at the U.S. Centers for Disease Control and Prevention and the National Institutes of Health helped Samaritan’s Purse obtain the drug, Isaacs said in his testimony.

A Spanish priest, Miguel Pajares, is the first European citizen to contract the disease and be returned home. Pajares was evacuated this morning to a hospital in Madrid, according to the newspaper El Pais.

The Ebola virus is spread through direct contact with an infected person’s bodily fluids. There is no approved cure, and about 55 percent of those infected in the current outbreak have died, Pablos-Mendez said. A State Department official and Thomas Frieden, the CDC director, also are scheduled to testify at the House hearing.

The disease causes fever, followed by vomiting, diarrhea and hemorrhaging. Standard treatment is to keep patients hydrated, replace lost blood and use antibiotics to fight off opportunistic infections.