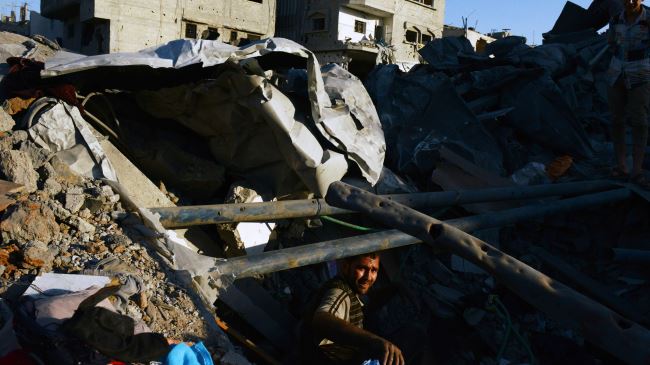 A Palestinian man salvages personal belongings from the rubble of his home in the devastated neighborhood of Shejaiya in Gaza City, August 7, 2014.

A three-day truce between Israel and the Palestinian resistance movement of Hamas expires as indirect talks in Cairo on new border arrangements for the blockaded Gaza Strip hit a deadlock.

The lull expired at 0800 (0500 GMT) on Friday. A senior Hamas official has said the group would not extend the ceasefire because Israel had not responded to any of the Palestinian demands at the negotiations.

The movement says truce talks with the Israelis will nonetheless continue.

Less than an hour before the end of the ceasefire, the Israeli military said two rockets fired from the Gaza Strip had landed in southern Israel but caused no casualties. Hamas said it had fired no rockets.

The Israeli military later again said several rockets had been fired from Gaza minutes after the expiry of the truce. The Palestinian group has not confirmed this.

Israeli tanks have started to redeploy to their previous positions during the Gaza war.

Thousands of Palestinians were fleeing their homes east of Gaza City on Friday in fear of Israeli attacks after the truce ended.

The Israeli regime’s 29 days of military attacks against the Gaza Strip, which began on July 8, claimed the lives of nearly 1,900 Palestinians, including more than 400 children, and wounded over 9,500 others.