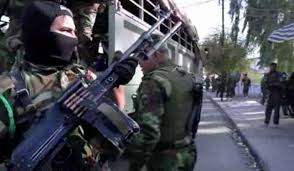 ERBIL, Iraq — As Sunni and Kurdish forces battled on Thursday for control of towns west of Erbil, the regional capital of northern Iraq, civilians fleeing the fighting flooded the airport here and swamped the Iraqi Airways office in a futile attempt to get tickets to Baghdad.

In the early hours of Thursday, forces from the Kurdish pesh merga left checkpoints guarding several largely Christian settlements because they had been called to defend Kurdish towns closer to Erbil, according to a colonel in the Kurdish Defense Ministry.

By late Wednesday night, Kurdish television was reporting that Mahmour and Gwar, two Kurdish settlements less than 20 miles west of Erbil, had fallen to Sunni extremists from the Islamic State in Iraq and Syria, or ISIS. By Thursday morning, a colonel in the pesh merga said that Mahmour had been retaken, while militants remained in control of Gwar.

The latest ISIS push followed its pattern of exploratory attacks on the outskirts of an area it wants to take. On Wednesday, it repelled Kurdish efforts east of Mosul, which is 60 miles west of Erbil, and shelled Qaraqosh, which is one of several largely Christian settlements in the area. As plumes of smoke drifted across the plains of Nineveh, 25 miles west of Erbil, panicked residents fled from the settlements there in cars and pickup trucks piled with belongings, creating lines more than half a mile long at checkpoints guarded by the pesh merga.

On Thursday, many villagers who had not already left departed hurriedly, throwing just a few items in suitcases, said Father Amar, a Syrian Catholic priest from Bartella, one of the largely Christian settlements, who left with them. Shortly afterward, he said, he had spoken to some who had decided to remain, and they reported that ISIS had taken the town.

Father Amar said that there were “thousands” of Christian and Arab families marooned at the main pesh merga checkpoint trying to enter the Kurdish region on Thursday morning. No one was being allowed to pass, he said.