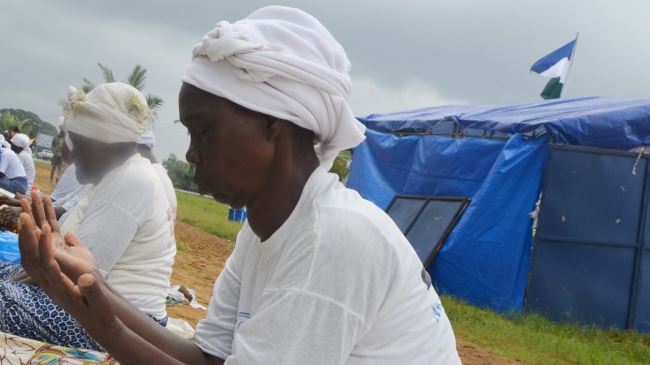 Members of Women in Peace Building Network (WIPNET) pray on August 6, 2014 on a field not far from Liberia’s president residency, in Monrovia, to drive away Ebola from Liberia.

US President Barack Obama has said it was premature to send experimental drugs to Ebola victims in Africa.
He said affected countries should focus on building a “strong public infrastructure,” adding, “I don’t think all the information is in on whether this drug is helpful.”

Liberia has declared a state of emergency due to the deadly outbreak of the disease, which has killed more than 930 people in West Africa.

Liberian President Ellen Johnson Sirleaf made the announcement on Wednesday. She and said the extraordinary measures were needed “for the very survival of our state.”

“The scope and scale of the epidemic, the virulence and deadliness of the virus now exceed the capacity and statutory responsibility of any one government agency or ministry,” she said.

The latest official toll across west Africa hit 932 deaths since the start of the year, the World Health Organisation (WHO) said, with 1,711 confirmed cases, mostly in Guinea, Liberia and Sierra Leone.

The WHO met in an emergency session in Geneva to decide whether to declare an international crisis.