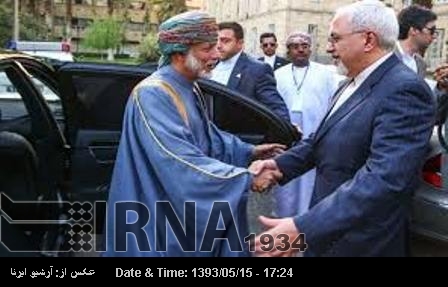 Zarif, who is in Muscat to attend a joint meeting with the foreign ministers of Oman, Turkmenistan and Uzbekistan aiming to facilitate transit of goods from the Central Asia to the Persian Gulf, conferred with his Omani counterpart Yusif Bin Alawi and Omani Deputy Prime Minister Fahd Bin Mahmoud, who leads ther Omani government in absence of King Qaboos.

According to IRNA, the meeting in Muscat aims to inaugurate the North-South Corridor, which will facilitate transport of goods from Central Asia to the Persian Gulf.

Foreign ministers of Iran, Turkmenistan, Uzbekistan and Oman have signed an agreement on transport and the transit of goods via railway, sea and land.

The North-South Corridor will link Uzen in Kazakhstan with Gyzylgaya-Bereket-Etrek in Turkmenistan and end at Gorgan in the Iranian province of Golestan. Then it will be connected to Iran’s national railway leading to the Persian Gulf ports.

The 900-kilometer railway will also link Kazakhstan and Uzbekistan to Iran.

The corridor will facilitate transit of three to five million tons of cargo annually.

The figure could reach to as high as 12 million tons.