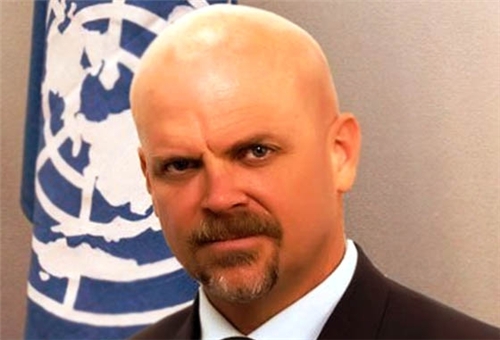 TEHRAN (FNA)- The UN Chief’s Representative in Iran, Garry Lewis, in a meeting with members of the Reformist Front’s Coordination Council in Tehran on Wednesday condemned the recent Israeli attacks on UN protected schools in the Gaza Strip as “criminal and unethical action”.

“I consider this action as criminal and unethical and Mr. Ban Ki-moon also said that the attack on the UN school in Gaza should be probed according to the international law and the people responsible should be brought to the justice,” Lewis said during the meeting.

He pointed to the massacre of a large number of small children by the Israeli forces in Gaza, saying, “We have all seen them in pictures crying or chopped into pieces ….”

Lewis pointed to the UN’s duties with regard to the Gaza incidents, and said, “Gathering information is the least we can do and finding and defusing the unexploded bombs are among our other duties.”

On Sunday, an Israeli air strike has hit another UN-operated school in Gaza Strip, killing at least 10 people and injuring 35 others, Palestinian health authorities reported.

The missile fired by an Israeli aircraft hit the entrance to the school in the town of Rafah in Southern Gaza Strip.

The school served as a shelter for some 3,000 Palestinians amid the ongoing violence in the region, as Israel continues its military aggression against Palestinians in the blockaded Gaza Strip.

Israel has been pounding the blockaded Gaza for 30 consecutive days, killing nearly 1,900 people and injuring more than 11,000 others.

Four out of every five Palestinians killed during Israel’s ongoing military offensive in Gaza have been civilians, including hundreds of women and children.