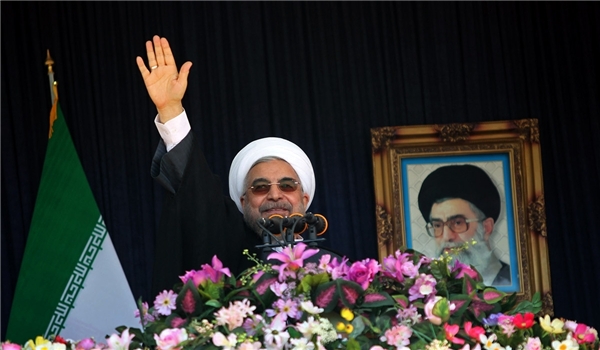 “Our people, hand in hand with the oppressed people of the world, have been and are standing beside the people of Palestine, Lebanon, Syria and Iraq,” President Rouhani said, addressing thousands of people in Chaharmahal-Bakhtiari province in Western Iran on Wednesday morning.

He further pointed to the ongoing negotiations between Iran and Group 5+1 (the US, Russia, China, France and Britain plus Germany), and said that his “administration has stood against the countries which had frozen Iran’s assets in a cruel way, and taken, at least, (a sum of) $7 billion out of their hands”.

The Iranian president underlined that his government will take similar measures powerfully in the future to unfreeze more frozen assets of the country.

He pointed to the statements of Supreme Leader of the Islamic Revolution Ayatollah Seyed Ali Khamenei in September on Heroic Flexibility, and said, “As the Supreme Leader has mentioned in his speeches we should show heroic flexibility, but humble flexibility towards the world powers is banned.”

The Iranian president noted that his government would take back the Iranian nation’s rights through logic and reasoning.

In September 2013, Supreme Leader of Islamic Revolution Ayatollah Seyed Ali Khamenei said that he has long held belief in “heroic flexibility” in domestic and foreign policy, but he also cautioned that the tactic which is very necessary on some occasions should only be practiced after one gathers deep insight about the nature of his/her rivals and their goals.
By Fars News Agency
The Iran Project is not responsible for the content of quoted articles.
Gaza Strip, Gaza under attack, Gaza war, Hassan Rouhani, Iran's president, Israel aggression against Palestinians, Israel-Gaza conflict, Quoted, Rouhani visit to Shahr-e Kord, Shahr-e Kord August 6, 2014
Chinese businessmen keen to invest in Qom
Iran ready to help Iraqi displaced Christians: Envoy