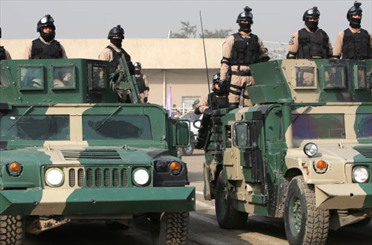 ISIL: Both Shia and Sunnis infidels

The governor of Tikrit who was appointed by self-declared Islamic State of Iraq and the Levant (ISIL) terrorist group after seizure of the city appeared on Iraqi national TV after he was detained by Iraqi army.

In his interview he said that all Muslims are infidel and must be executed unless they swear allegiance to ISIL head Abu Bakr al-Baghdadi. He also called imam Abū Ḥanīfa – founder of the Sunni Hanafi School to which many Sunni Muslims adhere – as an evil who introduced new heretical ideology.

ISIL governor admitted that they hope to establish a caliphate with Baghdad as its capital and they will demolish what he described as signs of pagan religions like churches and Shia mosques all over the country. In regard to Iraqi Christians, he said that all Christians must convert to Islam and pay tax or die.