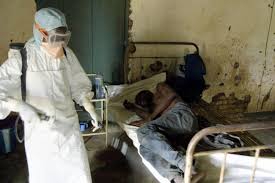 Ebola drug panel set by WHO to weigh unproven drugs use

The World Health Organization will convene a panel of medical ethicists next week to explore the use of experimental treatments for Ebola amid the worst outbreak of the disease on record.

An experimental antibody cocktail developed by Mapp Biopharmaceutical Inc. was used to treat two infected American health workers whose conditions have improved. The WHO’s announcement came after Nigeria’s health ministry said it has written to the director of the U.S. Centers for Disease Control and Prevention to request access to the drug.

Use of the drug, called ZMapp, is raising questions about whether a medicine that hasn’t been shown as safe in humans should be distributed more widely during the outbreak and, given the limited amount of medicine available, who should get it, the WHO said in a statement.

“We have a disease with a high fatality rate without any proven treatment or vaccine,” said Marie-Paule Kieny, assistant director-general at the World Health Organization, in the statement. “We need to ask the medical ethicists to give us guidance on what the responsible thing to do is.”

While Tekmira Pharmaceuticals Corp. (TKMR) was conducting early-stage tests of its Ebola therapy in humans, the FDA in July placed the trial on hold due to safety concerns. Other companies developing drugs for the deadly disease include Fujifilm Holdings Corp. (4901),BioCryst Pharmaceuticals Inc. (BCRX) and Sarepta Therapeutics Inc. (SRPT)

Separately, the U.S. Food and Drug Administration said today it has authorized use of a “real-time” diagnostic test developed by the U.S. Department of Defense to help detect the Ebola virus inAfrica. A positive result from the test should be be considered “presumptive” rather than conclusive, according to a fact sheet provided by the defense department.

Nancy Writebol and Kent Brantly, American aid workers who contracted Ebola in Liberia, have been given doses of ZMapp. Writebol, 59, was showing “continued improvement” yesterday as she arrived in the U.S. for treatment, said Bruce Johnson, the president of SIM USA, the charity that sponsored her work in Liberia.

As of Aug. 4, the outbreak of the Ebola virus had killed 932 people, the WHO said today. Most of the cases are in Guinea, Liberia and Sierra Leone in West Africa. Two deaths have been reported in Nigeria.