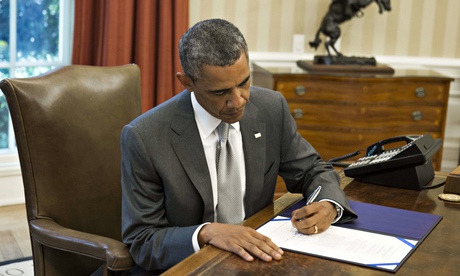 Barack Obama signs off emergency funding to Israel for the Iron Dome missile defense system. ‘US allies around the world are queuing up.’ Photograph: Saul Loeb/AFP/Getty Images

The missile defence shield, currently blocking Hamas rockets, limits the need for pre-emptive strikes by any country that has it

Throughout the war between Israel and Hamas in Gaza, Israel’s Iron Dome defence system has received extensive coverage in the international media. It may be an Israeli defence system, but the United States provides significant financial support for the project, and has just approved an additional $225m (£133m) towards it. By funding, developing and deploying anti-missile shields, the United States claims that it is not just protecting its allies but also strengthening stability and disincentivising the use of force. But if that’s the case, why has Iron Dome not prevented Israel’s government from sending troops into Gaza?

On the face of it, Israel’s operation against Hamas has demonstrated that the logic behind this policy is faulty. Iron Dome has reportedlyintercepted close to 90% of Hamas rockets fired into Israel’s residential areas – yet Israel still sent forces into Gaza. However, the reality is rather more complex. Israel’s ground offensive into Gaza was sparked by attacks from Hamas tunnels, which have posed a more serious threat to southern Israel than the rockets that have been devalued by the defence system.

Without Iron Dome, the ground invasion would surely have happened much earlier. In November 2012, Hamas launched a series of rocket attacks against Israeli population centres, but the successful performance of Iron Dome meant that there was no need for a ground offensive. The full extent of the threat of the tunnels to southern Israel had yet to materialise.