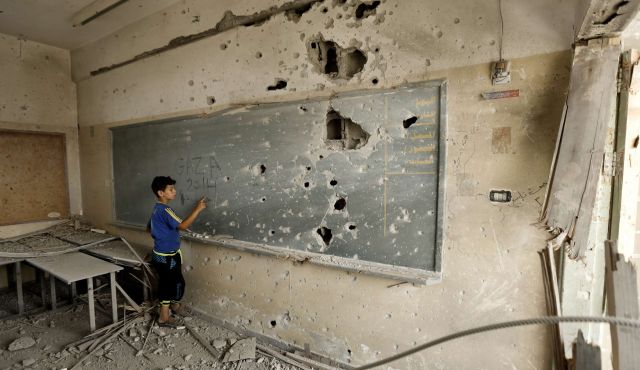 No missiles fired since 8 A.M. Tuesday; During course of Gaza op, over 260 rockets were launched from vicinity of schools, IDF says.

As Operation Protective Edge enters its 30th day, both Israel and the Palestinian factions in Gaza continue to abide by the 72-hour cease-fire brokered by Egypt, which was implemented at 8 A.M on Tuesday. The Israel Defense Forces withdrew its remaining forces from Gaza after the cease-fire came into effect. The IDF said it has demolished all of Hamas’ known tunnels, some of which have been used to breach Israel’s border and carry out attacks.

An Israeli delegation is currently in Cairo to negotiate a more permanent agreement, with Egyptian mediation. A Palestinian delegation, including members of Hamas and Islamic Jihad, is in Cairo, as well. Officials in Gaza say more than 1,800 Palestinians were killed during the operation, most of them civilians. Sixty-four IDF soldiers and three Israeli civilians have been killed since fighting began on July 8.