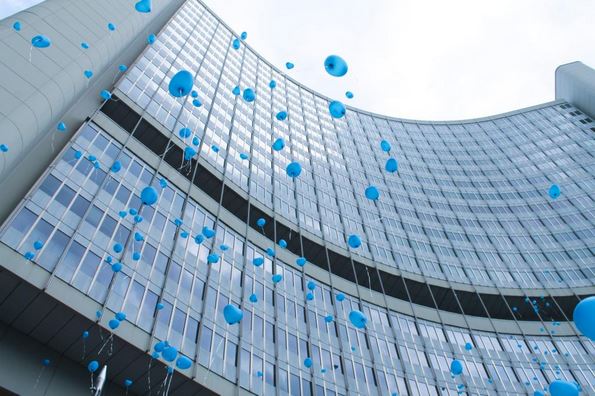 30 July 2014 – The United Nations marked the first World Day Against Trafficking in Persons. Human trafficking is a global problem and one of the world’s most shameful crimes, affecting the lives of millions of people around the world. Traffickers deceive women, men and children from all corners of the world and force them into exploitative situations every day.

To mark the day at the UNODC headquarters in Vienna, an event was organized at the Vienna International Centre with the participation of Yury Fedotov, UNODC Executive Director, Hui Sui, Special Advisor to the UNIDO Director General, Roman Romanovsky, Chargé d’Affaires of the Permanent Mission of Belarus, and Evelyn Probst, coordinator of the Austrian civil society organization LEFÖ. The World Peace Choir Festival, comprising 650 children from across the globe, performed in support of the day, and released 500 blue heart-shaped balloons to demonstrate solidarity with the victims of human trafficking and to give a message of hope for their freedom.

On the occasion, Mr Fedotov said that human trafficking “exploits the dream of millions for a better life for themselves and their children. Traffickers steal this hope to turn people into commodities in a perfidious trade that, despite our efforts, continues to operate with impunity.” In a call to action, he noted that “we can all do our part to fight human trafficking. […] I encourage everyone to do and give what they can.”

A major step forward in tackling this crime is the Protocol to Prevent, Suppress and Punish Trafficking in Persons, Especially Women and Children, under the United Nations Convention against Transnational Organized Crime, which came into force a decade ago. This international instrument called for all acts of human trafficking to be criminalized for the first time, including trafficking for sexual exploitation, forced labour, organ removal, domestic servitude and other slavery-like practices.

Convictions reported globally, for example, remain extremely low: UNODC’s forthcoming 2014 Global Report on Trafficking in Persons shows that some 15 per cent of countries did not record a single conviction between 2010 and 2012, while 25 per cent only recorded between one and 10 convictions.

As part of efforts to raise awareness about this issue, and in particular highlight the plight of victims of human trafficking, UNODC has also launched a social media campaign entitled#igivehope. The campaign encourages people across the globe to express their solidarity with the millions affected by this crime. By using and sharing online the universally recognized hand heart – which represents love, care and friendship – people can offer a way to symbolically give back what victims of human traffickers have had stolen from them: hope.