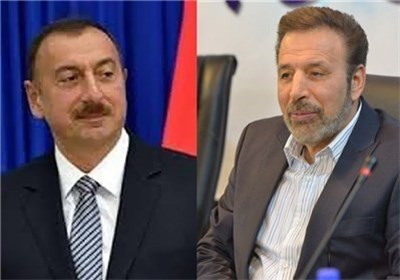 TEHRAN (Tasnim) – Azerbaijan’s President Ilham Aliyev said Tehran and Baku could turn into allies in the region thanks to their capacities.

Speaking in a meeting in Baku with Iranian Minister of Communications and Information Technology Mahmoud Vaezi, Aliyev highlighted the two countries’ exceptional potentials, adding that these potentials could help Iran and the Republic of Azerbaijan become regional allies.

He also referred to his recent visit to Tehran and underlined the positive outcomes of the trip.

Aliyev further expressed confidence that the discussions of the Iran-Azerbaijan joint economic commission in Baku would lead to the enhancement of bilateral relations in political, cultural and economic fields.

The Iranian communications minister, for his part, hoped that the joint commission of Iran and Azerbaijan will reach good agreements in the fields of trade, energy and transit.

Vaezi, who is heading an economic delegation to the Azeri capital, also referred to Aliyev’s meetings with Iranian President Hassan Rouhani in Davos and Tehran in recent months and highlighted the Iranian chief executive’s willingness for the expansion of bilateral ties and removal of all obstacles in the way of enhanced cooperation between Tehran and Baku.

During President Ilham Aliyev’s trip to Iran in April this year, high-ranking officials from the two countries signed three memoranda of understanding (MoUs) and a cooperation agreement.