Pentagon says it will continue to arm Israel 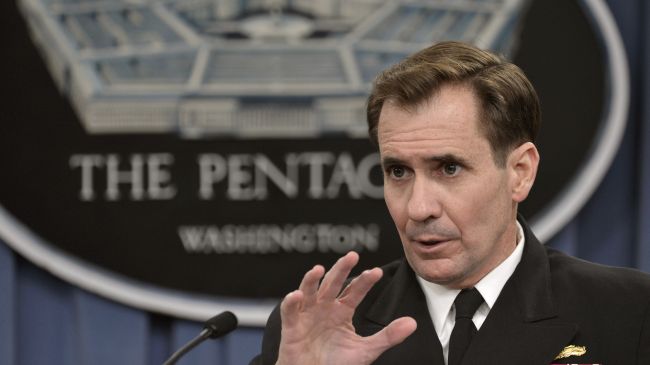 The Pentagon says it will not stop arming Israel even if halting the provision of arms could urge the Tel Aviv regime to remain committed to a cease-fire with the Palestinian resistance movement Hamas.

Pentagon press secretary Rear Adm. John Kirby told reporters on Saturday that Washington is providing Israel with arms and ammunition “through a longstanding foreign military sales program” and will continue to do so under the program.

“Israel is a staunch ally in that part of the world. And that program has existed for many years, and we’re supplying that material through that program,” he added.

Like other US officials – including President Barack Obama, Secretary of State John Kerry, and Secretary of Defense Chuck Hagel – Kirby said, “We respect the right for Israel to have to defend itself.”

Twenty-nine days of relentless strikes by Israel in the besieged Gaza Strip has killed at least 1,880 Gazans, among them some 430 children. Tel Aviv’s prolonged onslaught has also left nearly 9,600 Palestinians injured.

On Tuesday, a 72-hour truce between Hamas and Israel took effect, with Israel announcing a total retreat from the conflict zones.

Israel even targeted United Nations schools in its nearly month-long offensive against Palestinians in the Gaza Strip. US officials condemned Israel’s deadly airstrikes, saying they were “appalled” by a “disgraceful” attack on Sunday on a UN-run school sheltering about 3,000 displaced Palestinians.

Also on Monday, Obama signed a congressional bill that will provide Tel Aviv with an additional $225 million of American taxpayers’ money to improve its Iron Dome missile system.

The money would be in addition to the $351 million that’s already under discussion for Iron Dome in fiscal 2015. It would bring total funding to $576 million, compared with the $176 million requested by the Pentagon for the year that begins on October 1.

A Congressional Research Service report in April said that the US had provided more than $700 million to Israel for Iron Dome. The latest bill would lift that to about $1 billion.

Israel’s brutal atrocities against Palestinians are already heavily funded by Washington. Under a current 10-year deal with Israel, over $3 billion of American taxpayers’ money is flowing to Israel in military aid every year.

The incumbent administration is reportedly considering an increase in US military aid to Israel after 2017 when the current deal expires.