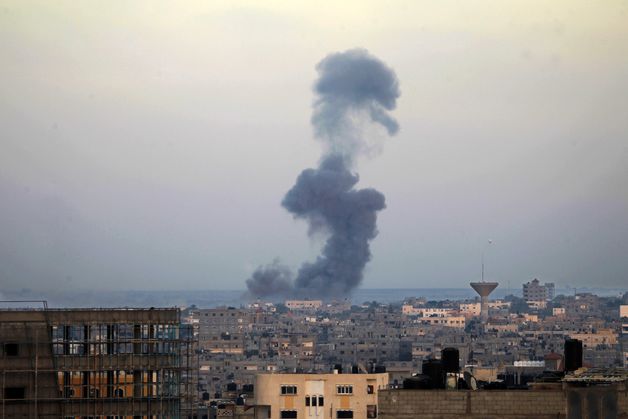 Israel says tunnel campaign over within hours amid truce reports

Israel’s military said today it was on course to destroy within hours all known tunnels dug by Hamas guerrillas in the Gaza Strip, meeting one of its stated objectives for an offensive ending its fourth week.

Gaza militant groups reported progress toward a 72-hour truce; Israel had no comment.

“We destroyed all the tunnels we knew of,” Major General Sami Turgeman, head of Israel’s southern command, said in comments broadcast on Channel 2 television. “All the tunnels we discovered in the course of the operation, we destroyed. In the next few hours, we’ll complete the tunnel operation.”

The Gaza offensive, which Israel says is also intended to quash rocket salvoes, has been the deadliest in the territory since Israeli settlers and soldiers left in 2005. At least 1,868 Palestinians have been killed, including hundreds of civilians, according to Gaza Health Ministry spokesman Ashraf al-Qedra. Sixty-seven people have been killed on the Israeli side, 64 of them soldiers.

While Israel has been reducing troop levels, the violence hasn’t let up. Al-Qedra’s ministry said today that an 8-year-old girl was killed in an Israeli airstrike on Gaza City. The Israeli military said it was checking the report. Palestinian officials said 50 bodies were removed from bombed-out buildings in the territory today.

The driver of a construction excavator, identified by police as an east Jerusalem Palestinian, was shot dead by an officer after he rammed his vehicle into a bus, overturning it. As he charged toward the bus, the assailant ran over a man in the street, killing him, while the bus driver and five pedestrians were hurt when the vehicle was flipped on its side, police spokeswoman Luba Samri said.

An hour later, a man was shot in the stomach near the city’s Hebrew University campus on Mount Scopus by an assailant on a motorbike, police spokesman Micky Rosenfeld said. Jerusalem Mayor Nir Barkat told Israel Radio the man who was shot was a soldier. Roadblocks were set up in the area.

In Tel Aviv, the police presence was strengthened after a someone threatening to carry out a suicide attack placed a call to a hotline, Samri said.

The violence in Jerusalem, which had been largely calm since fighting between Israel and Hamas militants escalated on July 8, came during a seven-hour period when Israel held its fire in parts of Gaza to allow for humanitarian relief. It continued to hit targets elsewhere in the territory and air strikes resumed after the respite ended at 5 p.m. local time.

The bus attack had echoes of three similar attacks carried out in 2008 and 2009. Jerusalem Police Commander Yossi Farienti told Channel 2 television that reinforcements would be brought to the city.

U.S., Palestinian and Egyptian envoys are meeting in Cairo in search of an end to the third major conflict between Israel and Gaza militants in less than six years. Israel isn’t sending anyone, saying Hamas has undermined previous truce efforts, a charge the group levels at Israel, too.

Hamas is considered a terrorist organization by Israel, the U.S. and European Union.

Ziad Nakhla, a leader of the Islamic Jihad militant group that also has fighters in Gaza, told Hamas’s Al-Aqsa television that a truce may be announced within hours. However, Hamas leader Mushir Al-Masri said that while the atmosphere in Egypt was positive, it was too early to talk about a cease-fire accord.

Both sides have accused the other of breaking previous truces, the latest of which collapsed last week after just hours. Israel and Hamas want a cease-fire to address issues earlier accords didn’t resolve. Hamas is pressing to lift a blockade that Israel, citing security concerns, initiated in 2006 and Egypt joined. Israel wants Gaza militants disarmed.

Since the Israeli operation began, Hamas and other Gaza militant groups have fired 3,330 rockets at Israeli towns and cities and have staged armed raids against Israel through tunnels and by sea. Israel has hit more than 4,700 targets in the seaside strip and has uncovered more than 30 tunnels, according to the army.